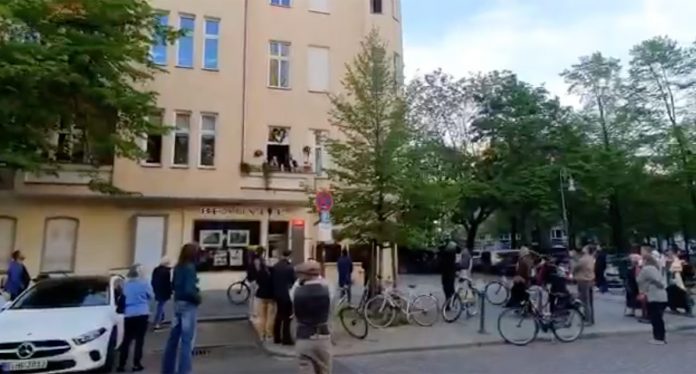 Multi-talented classic South African tenor Etienne van der Nest has been bringing Berlin to a stop each evening, as he sings magnificently from his balcony.

As word has grown in the German city about Etienne’s performances, crowds have gathered to watch, to listen, to record, to applaud and to appreciate. To feel connected and in wonder that even in the worst of times, there can be excellence… and music and magic can fill the air.

Etienne said on social media: “I have to smile at myself for singing these items a-cappella on an open balcony in Berlin… Let’s just say I’m wearing my heart on my sleeve, and leave it at that.”

He’s been posting the videos – filmed by a neighbour Wilhelm – using hashtags #musicagainstcorona #etiennevandernest and #fasanenplatzmusic; and is sometimes joined by one or two other musicians (Soprana Ariane and Alexander).

On one occasion he said he felt very emotional “as people wrote their thanks on the pavement”.

He says: “In its imperfection, I expose myself as a musician. I have great gratitude for my neighbours for being on time at 19:00, every evening… we need to change the world.”

Etienne is well known and loved in both South Africa and Germany, by young and old.

I could have danced all night. Very blessed with my Soprano Ariane #musicagainstcorona #etiennevamdernest how blessed on my balcony

He trained at the University of Potchefstroom and then received the Ernest Oppenheimer Trust scholarship to study further in the USA.

He has performed at operas and concerts around the world from the US, to SA, Israel, Europe and Great Britain… but these raw performances from his balcony in Berlin will perhaps remain the most special, for lifting the hearts and souls of those under confinement.

I have to smile at myself for singing these items a-cappella on an open balcony in Berlin. “Granada” Let’s just say I’m wearing my heart on my sleeve, and leave it at that. #musicagainstcorona #etiennevandernest

This is the last week Etienne will be performing from Berlin balcony in what he calls “this most fulfilling experience”.