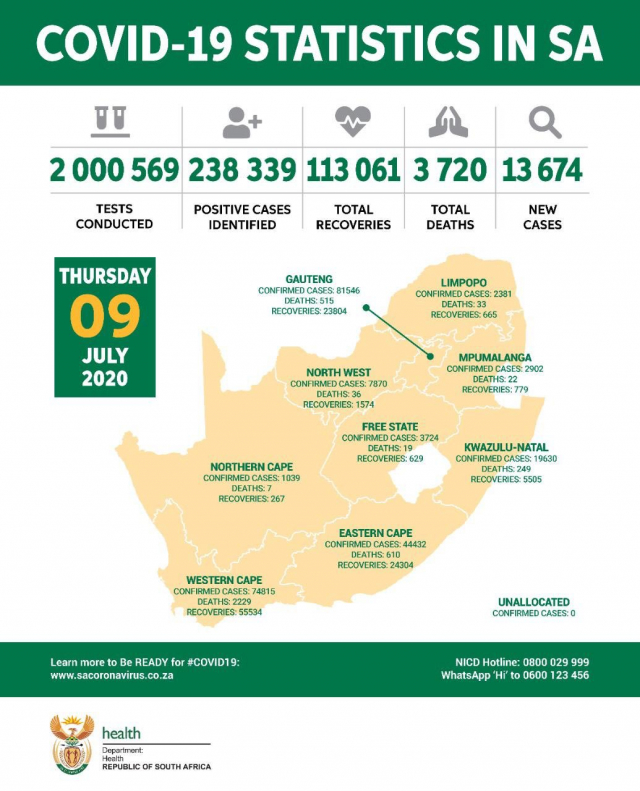 The devastating reality of COVID-19 continues to batter the country as South Africa reported a record of 13 674 new cases on Thursday, bringing the total to 238 339 infections.

Gauteng, which is now the epicentre, also hit new highs in daily cases, with 6 531 additional infections in the last 24 hours.

Meanwhile, 129 people lost their lives due to the novel Coronavirus which brings the death toll to 3 720.

Of these, both Gauteng and the Western Cape each recorded 37 deaths, 28 from Eastern Cape, 26 from KwaZulu-Natal, and one from the Northern Cape.

The department has since corrected a miscalculation after stating that the recent total deaths in Limpopo were 44 instead of 33 on Wednesday.

“This was a data interpretation error, which has been corrected. Reallocation has since been done and we have confirmed the current total with the province,” Health Minister, Dr Zweli Mkhize, explained.

In addition, the number of recoveries is 113 061, while 56 170 new tests were completed since the last report.

“We have thus reached a milestone of having completed over 2 million tests for Coronavirus,” he said.

The Minister has also paid a special tribute to laboratory services employees who have made this feat possible.

“This is an enormous achievement that we can all be proud of as South Africans,” he said, adding that 2 000 569 have been conducted since the outbreak.