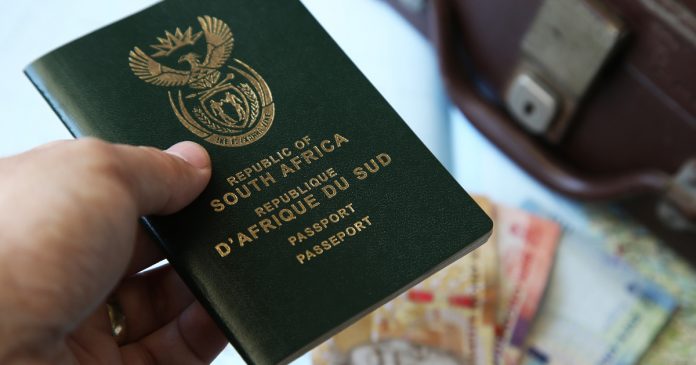 Many South Africans living abroad are losing the right to work, receive healthcare and remain legally resident in foreign countries because the Department of Home Affairs (DHA) has been unable to process their passports and other crucial documents in a timely manner, says Democratic Alliance (DA) Abroad Leader, Dr Rory Jubber.

While passport renewal applications for citizens living abroad were resumed on 27 July (after being closed since late March), additional urgent action is required.

Dr Jubber says given the already massive backlog of applications, and that SA passport renewals abroad already take 6 to 12 months as well as new uncertainties around processing times due to the lockdown in South Africa, this is of little immediate assistance to those citizens.

DA Shadow Deputy Minister for Home Affairs Adrian Roos has therefore written to the Minister of Home Affairs, Aaron Motsoaledi, to request that the passport applications of those working and living abroad, in need of urgent renewal, are stamped to remain valid for a period to cover the long waiting times of 6 to 12 months.

The DA Deputy Minister said in his letter that many South African expatriate citizens overseas “do not require the passports to return to South Africa under lockdown but rather to retain or extend the validity of their work and temporary residence visas. When the passport expires so does the visa. Roos offered up suggestions of procedures that are working in other countries.

Pakistan have implemented a system whereby expired passports were automatically extended for a certain period and whereby passports can also be extended manually for a period of one year at the Pakistani consulates and embassies for a small fee.

He says this would ease the pressure on passport processing services at the Home Affairs back office.

Meanwhile Dr Jubber also said in a statement, what most South Africans living abroad already know: “The issue of the inefficiency and lack of timeliness in processing passports for those living, working and travelling abroad is not new, it is a decade old problem that both the DHA and their colleagues at the Department of International Relations and Cooperation have shown minimal interest in rectifying.”

Earlier this month, desperate South Africans abroad sent a letter to South African Ministers, Diplomats and even the Presidential Office… but received no response. In the letter they explained:

Many, many South Africans who are living and working abroad are in dire straights as passports expire and visas run out. Now, they say, it’s easy, just repatriate but it’s not that simple. WE have lives and homes here, kids are not allowed to be repatriated and we are now in a situation where we’ll be jobless, homeless, and unable to fly to South Africa.

The letter revealed that:

Many families are losing homes and jobs due to expired passports! People who have lived in foreign countries for years, who have homes and businesses in South Africa, who have family and relatives depending on them for funds for food and life.

The South Africans abroad were frustrated by unanswered calls to the DHA. “According to human rights lawyers, this separation of families is a serious violation of rights!” said the writer, who wrote on behalf of “thousands of South Africans who are still stuck in foreign countries”.

The letter pointed out that SA’s economy would be in an even worse crisis if all these South Africans – who could no longer work abroad with expired passports – had to return home with no jobs, no homes and unable to pay tax.

The letter writer begged for help, saying: “I am at the end of the line and we need intervention and help! When I called my embassy yesterday I was treated with disdain and screamed at. We are all in this boat together, and right now, South Africans in foreign countries are lost and unable to feed families, both in South Africa and abroad:

Could you please look into opening the E-services for passports for those of us who are living in foreign countries. We can do biometrics at embassies which will take the pressure off the Home Affairs during this crisis. Many South Africas are trapped overseas without being able to travel to new jobs and are losing jobs because of expired passports.

The DA Abroad’s Dr Jubber says the SA Government “simply cannot blame the Covid-19 pandemic for these delays, as it has only worsened an already dire situation of poor service delivery. It is completely unacceptable that citizens abroad are left in a practical position of statelessness for an undisclosed number of months.”

SA citizen Ryszard Majewski‎, in Thailand, said: “I was amazed at the SA Embassy in Thailand yesterday when I was following up the renewal of my passport. The Embassy staff stated that Home Affairs is hopeless and inefficient, not responding to their heaps of requests from stranded SA citizens in Thailand, with various issues. Take my example – it will take more than 8 months+ to get a new passport. HELLO!!!”

Dr Jubber says the DA will continue to sound the alarm on the “inefficiencies” of Home Affairs in protecting the interests of South African citizens abroad.