Thirty international artists and photographers today launched a campaign to raise awareness and funds for the endangered African Painted Dog, also known as the African Wild Dog and the Painted Wolf, whose numbers have in the last century gone from half a million to under 7,000. 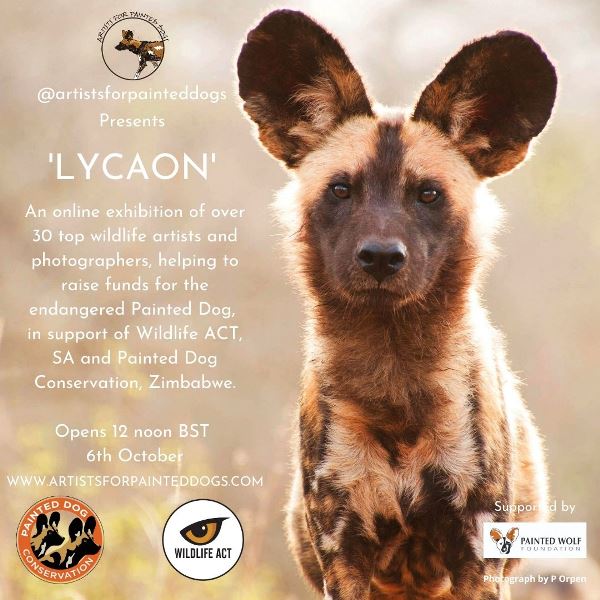 The artwork at ‘LYCAON – Artists for Painted Dogs’ is available to preview from 29 September and will go on sale on 6 October. Neither dog nor wolf the African Painted Dog is a canid in a separate genus called Lycaon. For more on the campaign, check the website here.

A century ago, approximately 500,000 Painted Dogs roamed the African continent. Less than 6,600, including around 700 breeding pairs, remain in the wild today, as a result of ongoing habitat fragmentation, snare poaching, road kills and diseases caught from domestic dogs.

*SOUND UP PLEASE!* 😁😁 A little special something to introduce Artists For Painted Dogs and what we have coming when the exhibition opens on October 6th!We will be showcasing all of the fantastic artists and their work individually in the next three weeks on here and on Instagram before we officilly open the site for sales. Please keep checking in daily to peruse the paintings, drawings, sculptures and photography all about the Painted Dog (and a few friends) and for a few fun videos from our artists :)www.artistsforpainteddogs.com#artistsforpainteddogs #painted_dog_conservation #wildlife_act #lycaon #africanwilddog #wildlifeconservation #artgallery #animalartists #wildlifeartWildlife ACT – Focused Conservation Painted Dog Conservation BBC News BBC The Guardian The New York Times The Times and The Sunday Times BBC Earth BBC Wildlife Magazine National Geographic Nat Geo Wild National Geographic UK Endangered Wildlife Trust Painted Wolf Foundation Art Insider The Telegraph Africa Geographic Wildside Magazine SA-People – for South Africans in South Africa and expats Wildlands WWF Times LIVE Zululand Observerr Daily Maverick News24.com Roving Reporters The Citizen News

Posted by Artists For Painted Dogs on Tuesday, September 15, 2020

The artists are donating 50 percent or more of the proceeds from the sale of their artwork to Painted Dog Conservation in Zimbabwe and Wildlife ACT in South Africa.

“Art is such a powerful tool to spread awareness and wonderment at the natural world.  I hope with this exhibition, we will shine a light on the enigmatic but endangered Painted Dog and build a strong pack mentality with our contributing artists to continue working for the plight of all species threatened today,”  said Heather Irvine, Artist and Curator, Artists for Painted Dogs. 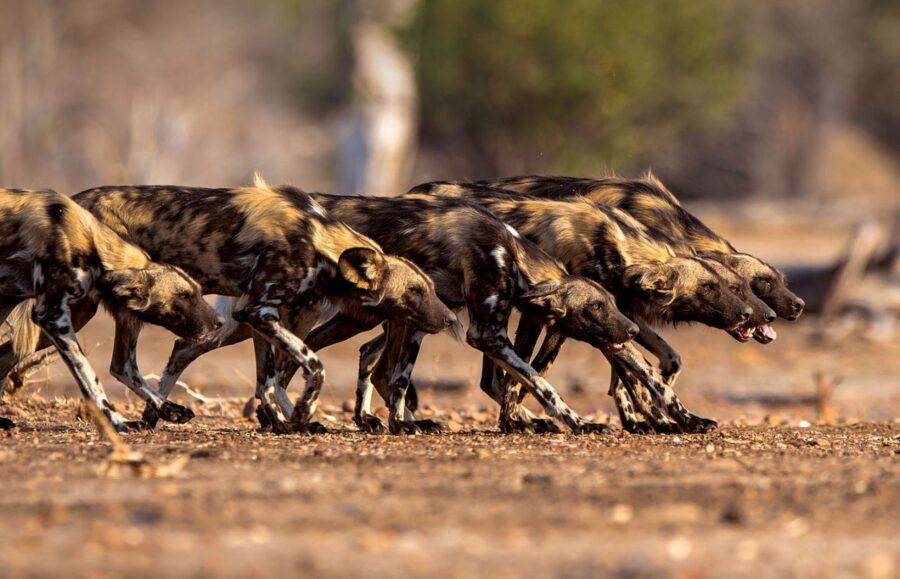 African Painted Dogs, with their iconic Mickey Mouse ears, are one of Africa’s most enigmatic yet threatened predators.

“The Painted Wolf Foundation is proud to support innovative initiatives that seek to raise awareness of this highly endangered species and much-needed funds for crucial operations in the field. This is especially critical during these times of COVID-19 where many traditional revenue streams have dried up,” said Nicholas Dyer, Chairman, Painted Wolf Foundation

Their reputation for being Africa’s most efficient predator is well-deserved, and it is generally accepted that 80 percent of their hunts result in success. This success is largely due to their high intelligence, teamwork and communication skills. Their dedication to each other’s well-being shows the special bond within the pack. When a dog becomes ill, injured or old, the rest of the pack cares for and feeds them.  This was one of the reasons that led to them being featured in David Attenborough’s Dynasties (BBC Series 1 – Painted Wolf).

Today, this remarkable species is extinct in 11 African countries and possibly extinct in 8 other countries, according to the IUCN Red List of Threatened Species.

As well as raising awareness globally for the African Painted Dog, the aim is to raise much-needed funds (especially with the additional challenges brought by COVID-19) to support two incredible organisations (@PaintedDogPDC and @wildlife_act) in the field, working hard to save the Painted Dogs and support the communities living alongside protected areas. Also to support artists who are struggling with physical exhibitions being closed during COVID-19, but even faced with the financial challenges, they are donating 50% or more of the proceeds from the sale of their artwork to the two organisations.