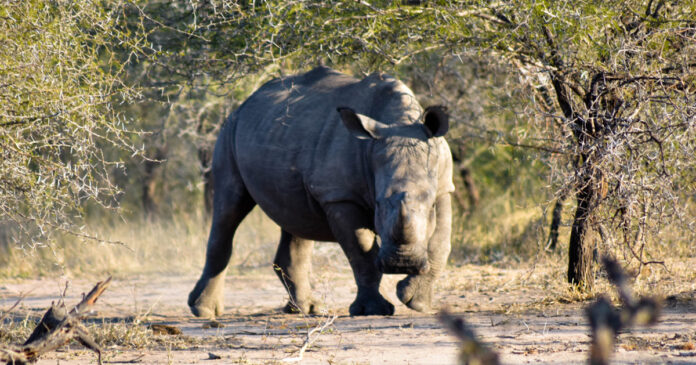 While conservationists have responded with major concern to SANParks’ latest rhino figures which reveal less than 4,000 rhino left in the park, the Department of Environment, Forestry and Fisheries has painted a different picture, today publishing a glowing report on its fight against rhino poaching.

SANParks has kept quiet about its figures in the last couple of years, claiming publishing the information would pose a risk to its conservation efforts. But in the last week it surprisingly published the latest shocking rhino population numbers in its annual report… perhaps because of requests (which were declined) by the DA for these numbers to be released.

“Well, SANParks have now released these numbers and they paint a grim picture on the future survival of rhinos in South Africa. SANParks has revealed that it only has 3 529 white rhinos and 268 black rhinos left in the Park. These figures are alarming and confirm that South Africa’s white and black rhino populations are nearing extinction.”

The Department said today it had achieved a small win: “During 2020, 394 rhino were poached for their horn in South Africa. This is 33% less than the 594 killed in 2019 and marks the sixth year that rhino poaching has continued to decrease in South Africa.”

Bryant said despite SANParks’ repeated claims that rhino poaching is declining, “this is clearly not the case and in complete contradiction with what we have been hearing from people on the ground. Tourists and locals have consistently been reporting very low rhino numbers. These sentiments have been confirmed in chilling detail by the official numbers (of rhino left). It is now patently clear that the only reason that SANParks claims that poaching of rhino has decreased is because poachers are simply struggling to actually find more rhinos to poach.

“The sad reality is that even with the low numbers of rhino, poaching still continues. This is borne out by the arrest two weeks ago of a suspected rhino horn dealer, in possession of over 70 kilograms of rhino horn and R500 000 in cash. The stratospheric value of rhino horn, which sells for more than gold or cocaine, will continue to attract poachers unless the department takes serious and urgent steps to intervene. More must be done to increase anti-poaching efforts and to tackle any potential corruption within the reserves.

Environment, Forestry and Fisheries Minister Barbara Creecy claims the alleged 33% decrease in rhino poaching during 2020 was not just down to Lockdown Alerts (that curtailed the movement of potential poachers and rhino horn smugglers), but also due to the significant role rangers and security personnel played, as well as the SA government’s strategies which now include an Integrated Wildlife Zone approach – blurring borders between national, provincial and private parks to achieve maximum benefit in protecting the animals.

She said 10 years of implementing various strategies, including NGO community development programmes, amongst vulnerable communities to combat rhino poaching by local poachers – who are recruited and managed by crime syndicates – have paid off BUT unfortunately there is still an escalating demand in consumer countries which ensures this lucrative black market trade continues.

Rhino poaching provincial and national breakdown for 2020 (in comparison to 2019):

Rhino poacher arrests and convictions in 2020:

Thanks to the collaboration efforts between the NPA, DPCI, Stock Theft units of the Police and Green Scorpions, these are some of the prosecutions:

South Africa’s collaboration with other countries

There has also been regional information sharing between Botswana, Eswatini, Kenya, Namibia, Mozambique and Zimbabwe; and engagements with Vietnam which has seen rhino samples submitted to the RHODIS DNA database for analyses and further investigation. Malaysia and Singapore have also assisted in several investigations and the submission of rhino horn samples to RHODIS while information sharing between South Africa, China and Hong Kong has begun to further enhance SA’s ability to combat rhino horn trafficking, said the Department.

“almost 70% of our rhino population has been decimated”

Despite the positive talk from the Department, the DA’s Bryant says:

I would urge the Minister to intervene and present a comprehensive and open briefing on the rhino situation. Poaching will be on the agenda of the Portfolio Committee on the 16th of February where we hope to get more answers. Government cannot continue to look the other way while almost 70% of our rhino population has been decimated. If urgent action isn’t taken soon, our rhinos could be extinct within a generation and our grandchildren will only be able to see them in photos and documentaries.

Members of the public can report any suspicious activities around wildlife to its environmental crime hotline which is 0800 205 005 or the SAPS number 10111.