The Tokyo 2020 Olympics exploded into life on Friday night with a dazzling opening ceremony held at the National Stadium in Tokyo.

Despite Covid-19 restrictions which meant that the ceremony was closed to the public, things went off smoothly as a global audience tuned in to watch as the curtain lifted on the Games, a year after they had been originally scheduled.

Team South Africa looked resplendent in their walk-on outfit and a huge thanks goes out to Mr Price Sport and Veldskoen Shoes for the kit and contributing to such an auspicious occasion. 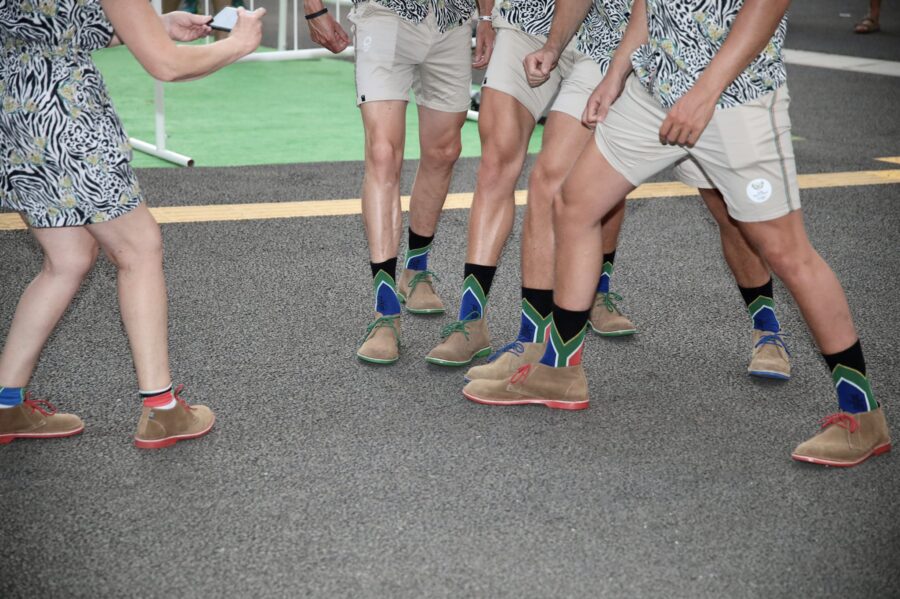 Team SA were led by flagbearers Chad le Clos and Phumelela Mbande and came out into the track as the 179th country, with the order being determined by the Japanese alphabet. The first country out was Greece (which is tradition), with France being the 205th nation before hosts Japan paraded to close out proceedings.

Cycling
Men’s Road Race – 11am (4.00am): The cyclists will tackle the most mountainous Olympics road race course in decades, with five major climbs on the 240km route between Musashinonomori Park and the Fuji International Speedway. Slovenia hold a strong hand with the likes of Primoz Roglic and Tadej Pogacar, while Belgium include Wout Van Aert and Greg Van Avermaet. South Africa’s three-man team is Ryan Gibbons, Nicholas Dlamini and Stefan de Bod

Hockey
Men’s Pool B – 6.30am (11.30am): South Africa vs Great Britain. Belgium are looking to become the fourth country to win the Olympic title as reigning world champions. They are in this group, along with Netherlands, Canada and Germany

Women’s Pool A – 9.15pm (2.15pm): Ireland vs South Africa. It’s 8th in the world taking on 16th. Also in Pool A are Netherlands, India, Great Britain and Germany. TeamSA had a practice match against 13th-ranked Japan and only went down narrowly 1-0

Judo
Women’s 48kg – Not before 11.50am (4.50am): South Africa’s Michaela Whitebooi, the only Judo player in the TeamSA squad, has been handed the toughest of draws against the reigning Olympic champion and current World Championship bronze medallist, Paula Pareto of Argentina

Rowing
Men’s Pair, Heat 1 – 9.50am (2.50am): Luc Daffarn and Jake Green will race in lane one, against Serbia, Netherlands, Romania and Spain. The first three will progress to semi-finals A and B, with the remainder going to the repechage.

Men’s Four, Heat 1 – 11.40m (4.40am): Great Britain have won the men’s four at each of the past five Olympic Games (2000-2016), already the longest winning run by a country in this event. Lawrence Brittain, Kyle Schoonbee, John Smith and Sandro Torrente take off from lane one against Australia, Romania, Netherlands and United States. The first two will progress to final A, with the remaining crews to the repechage

Swimming
Women’s 100m butterfly, Heat 3 – 7.30pm (12.30pm): Erin Gallagher takes off in the third heat of five from lane seven. She has a qualification entry time of 57.67sec. The fastest 16 from the 34 swimmers across the heats progress to the semi-finals

Men’s 100m breaststroke, Heat 4 – 8.32pm (1.32pm): Michael Houlie is the fastest entrant in this heat with a 59.64sec time, which gives him the preferred lane four. World record holder from the 2019 World Championships, Britain’s Adam Peaty, swims in the final heat at 1.40am. The fastest 16 qualifiers from the heats go through to the semi-finals

Waterpolo
Women’s Group A, preliminary round – 6.20pm (11.20am): South Africa vs Spain. South Africa make their debut at the Olympics captained by Jordan Wedderburn. The country’s women have never been represented at the Games. Also in this group are Canada, Australia and Netherlands

Where to watch the Olympics if you’re in South Africa

If you missed the opening ceremony, you can watch all the key moments from the Olympics online at www.showmax.com or on your phone using the Showmax app, plus score an additional free month when you sign up for Showmax Pro before 31 August. (To claim your free month, go to www.showmax.com to subscribe or upgrade. That’s it, you’re all set!)

They must be so proud to have showcased their work on the global stage 🇿🇦#Tokyo2020 #Olympics pic.twitter.com/ILjQ9SPYhH