A much loved and loving family pet, Kei, is to receive a Heroism Award for risking his own life to save that of the family that adopted him from the SPCA last year. During a horrific home invasion in Benoni, South Africa, on 3 October, Kei almost lost his life after he bravely attacked an intruder (and is still not quite out of the woods).

The Lamont family had fallen in love with the young crossed Malinois dog just a year ago when they visited the Boksburg SPCA.

”Little did they know that, within a year, this dog was going to save their lives,” said the Boksburg SPCA in a heartfelt post on their social media page.

In the early morning hours of Sunday morning, two armed robbers broke into the Lamont’s home in Lakefield Benoni.

“The intruders made their way upstairs to where the family were sleeping. One intruder entered the main bedroom where a terrifying shoot out took place, and he was shot dead.

“The second intruder entered the eldest daughter’s bedroom, gun in hand, not knowing that Kei was also on the bed, watching over her best friend. Kei recognised danger immediately and flew across the room before the intruder could get through the door, attacking him with a force he wasn’t expecting.

“The intruder retreated back into the hall and down the stairs leaving a trail of blood behind him,” said the SPCA. As he was fleeing, he shot and killed the family’s little Biewer Yorkie. The SPCA said as small as she was, she gave her life to protect her family, “a little soul with a brave heart. Rest in peace sweet girl. You died a hero.”

Meanwhile, Kei didn’t back off, chasing the intruder down the stairs and into the kitchen where the attacker opened fire and shot Kei through her face, before escaping.

Despite being badly wounded, Kei knew she had to get help and “made her way out the gate to alert a neighbour she knew well. Surveillance footage shows her pacing up and down the gate trying to get help. She couldn’t bark because one of the bullets had shattered her jaw. With no luck, she ran down to the lake, a place she’s familiar with, looking for help.

”Back inside the Lamont home, the search for Kei became frantic and the family drove out into the streets looking for her. Forty minutes later they found her lying on the grass by the water.

“The owners contacted the Boksburg SPCA who attended the scene immediately and assisted the Lamont family. Kei was rushed to an after-hour vet where they stabilized her and gave her plenty of morphine.”

Later that morning, she was x-rayed, and it was discovered that the bullet had entered the side of her nose, shattered two top mollars, severely injured her tongue and broken her jaw. Surgery was done a little later to repair the tongue and bullet wounds, said the SPCA.

Kei was released on Tuesday afternoon and referred to specialist Professor Steenkamp at the Onderstepoort Veterinary Academic hospital for reconstructive surgery on her jaw.

“She’ll need a plate in her jaw and a possible bone graph. She will have to eat soft food for 4 to 6 weeks. The vets are hoping for a full recovery,” said the SPCA a couple of days ago.

Unfortunately the canine hero has since had major surgery – on Thursday – where it was discovered that her injuries are worse than suspected and “quite severe”.

The Boksburg SPCA said yesterday: “Her tongue will need further treatment and more fragments of the bullet were found in her jaw bone.
It will be a tough road back to recovery for little Kei but the Lamont family will do whatever it takes to get Kei back to good health… The thought of the pain and confusion she must be feeling is heartbreaking. Come on Kei! YOU CAN DO THIS!”

Award for Heroism for Kei

As soon as she’s better, the Boksburg SPCA will be presenting Kei with an award for heroism.

”Kei protected her family because she felt loved and was not simply placed in the back yard for ‘security’ like so many dogs in this country are,” said the Boksburg SPCA. “This is a beautiful example of how an unwanted, cross breed, SPCA animal can go from ‘zero to hero’. There are thousands of dogs just like Kei sitting in SPCAs around the country, waiting to be adopted. Look after your pets and we promise, they’ll look after you!” 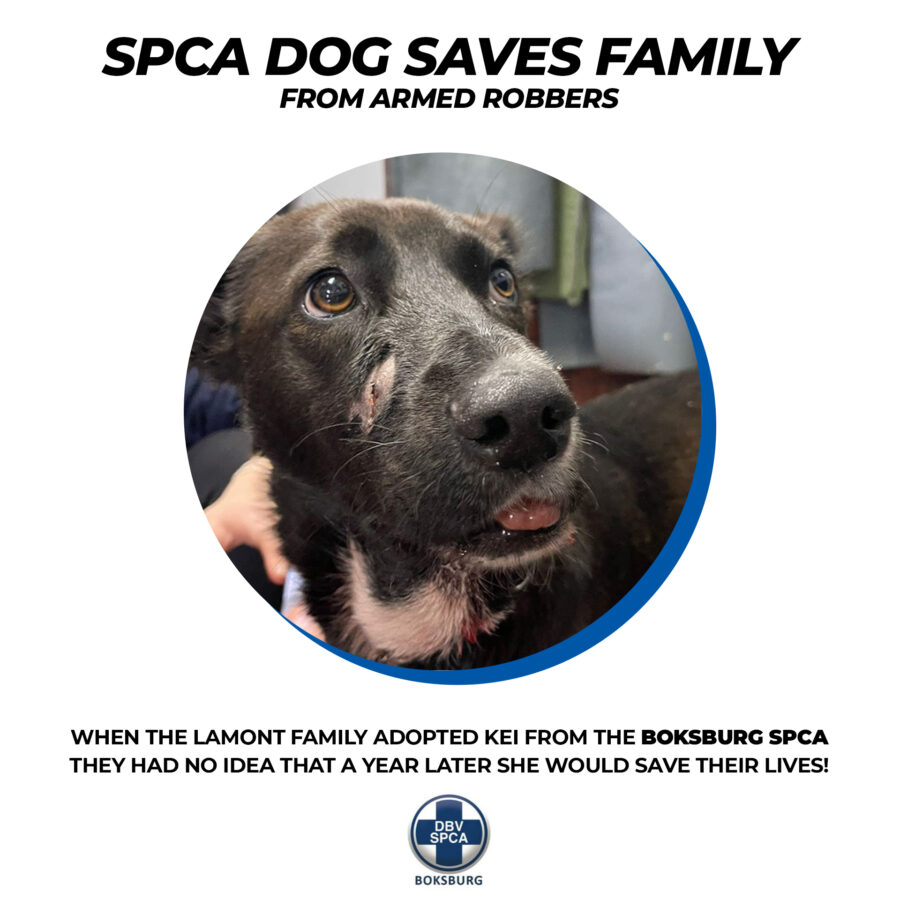 Boksburg SPCA is a registered NPO (NPO 001-863) which receives no government funding and is reliant on the generosity of donors EVERY month to cover their running costs. They are appealing to 500 of their fabulous +32000 FB supporters to sign up via:

Payfast, or to EFT a 𝗥𝟱𝟬 recurring donation to assist them reach break-even every month!
All donations qualify for a 𝘚𝟣𝟪𝘈 𝘛𝘢𝘹 𝘊𝘦𝘳𝘵𝘪𝘧𝘪𝘤𝘢𝘵𝘦.