Kei, the hero dog from Benoni, South Africa, that bravely fought off an armed intruder and helped save her human family ten days ago, has finally been released from hospital after suffering grave injuries when the intruder shot her through the face. The Lamont family say she is so happy to be home… but is still being tube fed and has a long road to recovery ahead of her.

Boksburg SPCA said in a post, that the first thing Kei did when she got home was run to the part of the wall which the second burglar had fled over. (The first was fatally wounded during a horrific shoot-out in the main bedroom. The second intruder tried to enter the eldest daughter’s room… but was attacked and chased off by Kei, who had been sleeping on her bed. The intruder sadly shot and killed the family other little dog, Holly.)

Kei’s family told the SPCA that Kei “sniffed and inspected the entire area, making sure all was safe before she went inside to lie on her bed. Improvements to the home alarm system are in progress and every time the alarm is tested, poor Kei starts shaking and pacing. Our hearts bleed for her but she’s in good hands.”

Kei’s ‘mom’ has to tube feed her every three hours, medicate her, and check her dressings. Apparently the young crossed Malinois dog, who Kei’s family had adopted just a year ago from the Boksburg SPCA, sits there “as good as gold and obediently lets her mum nurse her”. 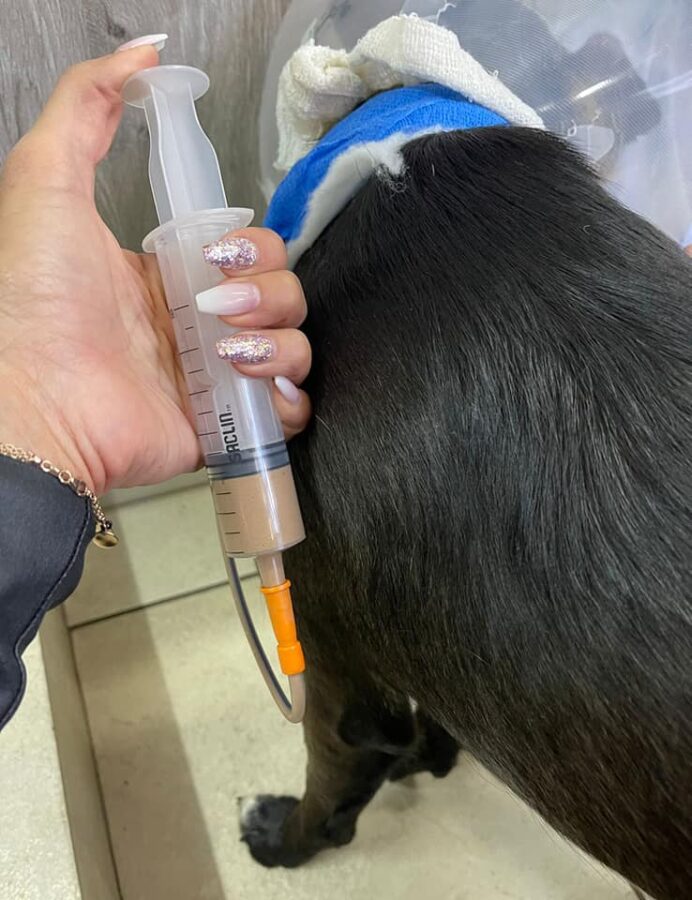 Tomorrow (Thursday) Kei will have to return to Onderstepoort for another scan. Once vets are certain there’s no shrapnel left in her jaw bone, they will proceed to fit a plate in her jaw.

If you would like to help Kei and her family…

Kei’s overall treatment is going to reach approximately R60,000. Sarah Lamont has set up a BackaBuddy account for anyone who would like to contribute towards Kei’s treatment. Caring South Africans have already raised almost half that amount!

Gun linked to other robberies

The Boksburg SPCA also added that they have been informed the gun that was used to shoot at the Lamont family has been linked to several other armed robberies.

As soon as she’s better, the Boksburg SPCA will be presenting Kei with an award for heroism.

”Kei protected her family because she felt loved and was not simply placed in the back yard for ‘security’ like so many dogs in this country are,” said the Boksburg SPCA. “This is a beautiful example of how an unwanted, cross breed, SPCA animal can go from ‘zero to hero’. There are thousands of dogs just like Kei sitting in SPCAs around the country, waiting to be adopted. Look after your pets and we promise, they’ll look after you!”

MORE: Boksburg SPCA Facebook page (they need support too for all the animals they rescue)