South Africa’s very own Rambo is back! if you remember, Leo Prinsloo became a global internet sensation after leaked footage went viral of his reaction to an attempted high-value goods-in-transit heist.

Stunned by Leo’s cool attitude and focused action in a crisis situation, South Africans (and the world!) had an example of what can happen when good people take a stand. (You can rewatch it below.) 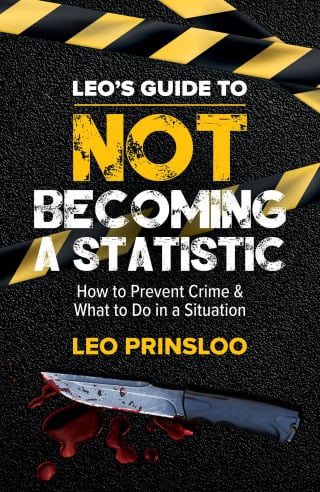 Tracey says: “It is a guide to living your safest life in South Africa – something which has become increasingly important as our crime statistics continue to rise. Straight-talking and honest – much like Leo himself – this book is an easy to use manual that makes keeping safe accessible, with relatable information and easy to implement tips.

“Leo has a wealth of knowledge on how to manage life-threatening incidents. Driven by a desire to empower South Africans and help them claim back their sense of safety, he offers advice for dealing with every risky situation, from how to handle hijackings and road rage, to how to keep your children safe, to the best way to secure your home and business. He also provides comprehensive information about handling firearms and basic first aid.”

Leo Prinsloo joined the police force straight after school and remained for 17 years. He served as a station policeman for five years and in 1992 he applied for Special Task Force training. Back then, the Special Force of the South African Police Service was the country’s equivalent of the United States’ SEALs or British Special Air Services (SAS). You needed to complete nine months of basic training just to get onto the unit.

According to Tracey, “Leo felt like this was something he had been preparing for his whole life. He worked through the ranks to become head of the snipers, and spent his last four years in the unit focusing on training and deployment. In 2004 he left to start his own training company, The Edge Shooter Training Academy – and they cover the entire spectrum of security requirements, depending on what their clients need, from beginner firearm training to advanced, as well as advanced driver training for security guards, close protection training and medical training.”

Leo says that taking the first step towards securing your safety is the most important, and his book will help South Africans take that step…

If you’d like to watch some excellent South African crime shows, don’t miss Devilsdorp (available in SA) or Skermerdans (available in SA and most countries abroad on Showmax International).