Athol Williams is a South African hero. The speaker, author and advocate – who hails from Mitchell’s Plain – was the first person to earn Masters degrees from five of the top universities in the world. He’s also an award-winning author and poet; and a passionate South African who couldn’t keep quiet when he saw wrongdoing. But now he’s had to leave the country he so loves for his own safety. Here’s Athol’s full statement:

On Monday 1 November 2021 I hugged every member of my immediate family, us all in tears, as I said goodbye to board a flight. I was not going on vacation or taking a business trip, I was leaving South Africa for my safety. Concern for my safety had been growing since I blew the whistle on companies and individuals involved in state capture and testified before the Zondo Commission.

Rather than diminish after I testified, these concerns increased while the prospect of prosecutions grew. After Babita Deokaran was assassinated, concerns spiked, because it showed that authorities were choosing not to proactively protect whistleblowers.​

Knowing that my government offers me no protection after I’ve acted in the public interest is a disturbing reality. I implicated 39 parties in my testimony so threats could come from many places. After receiving warnings from trusted allies and a civil society organisation about a coordinated effort against me, I took the sad step to leave home, again without any help.​

I have spoken up continuously about injustices in our country and taken action where I could. Rather than support me, I’ve faced alienation and abandonment by corporate South Africa which I served for many years, from the university where I taught ethics, and from my government; and I’ve been let down by many friends. I’ve lost all sources of income and had to sell belongings to meet my obligations which include funding social projects like Read to Rise which works with 20,000 children annually.

I have suffered severe damage to my health and my reputation. Now I have lost my home, being forced out of the very country I acted to defend. I feel profound sadness that leaves me in tears. I shake my head asking: ‘how did it come to this?’ ​

It’s a tragedy that those who choose to do the right thing have their lives shattered while everyone looks on. We all need to act to fix this tragedy.​

We are losing our battle against the moral degeneration of our society because South Africans are choosing to be silent when we should be speaking up. I understand this silence – we only have to look at Babita Deokaran’s fate and to the devastating experiences of whistleblowers, to understand the fear of speaking up.

This is why we need citizens with moral courage, those who will do the right thing even when they face danger.​

We have a very dangerous situation in South Africa where we accept the narrative that only a few bad apples are involved in state capture. The reality is that there are many important and influential people who we revere in society, who we offer awards to, who sit on boards and committees and lead grand initiatives and organisations, who are in fact enabling this capture and benefitting from it.

The corrupted web stretches across our society and needs bold action to clear this out. It starts with each of us. Challenge those around you to act with conscience and with courage.​

If I remained at home there was a good chance I’d be silenced, so I left, but I will continue advocating for truth and furthering the cause of justice no matter how far from home I am. I have little left to lose now other than the love of a few. But I will not lose my resolve to resist the capture of South Africa. I look forward to the day, soon, when I can return home to continue our collective effort to realise the promise of our democracy.

Read Athol Williams’ statement and find out more on www.atholwilliams.com 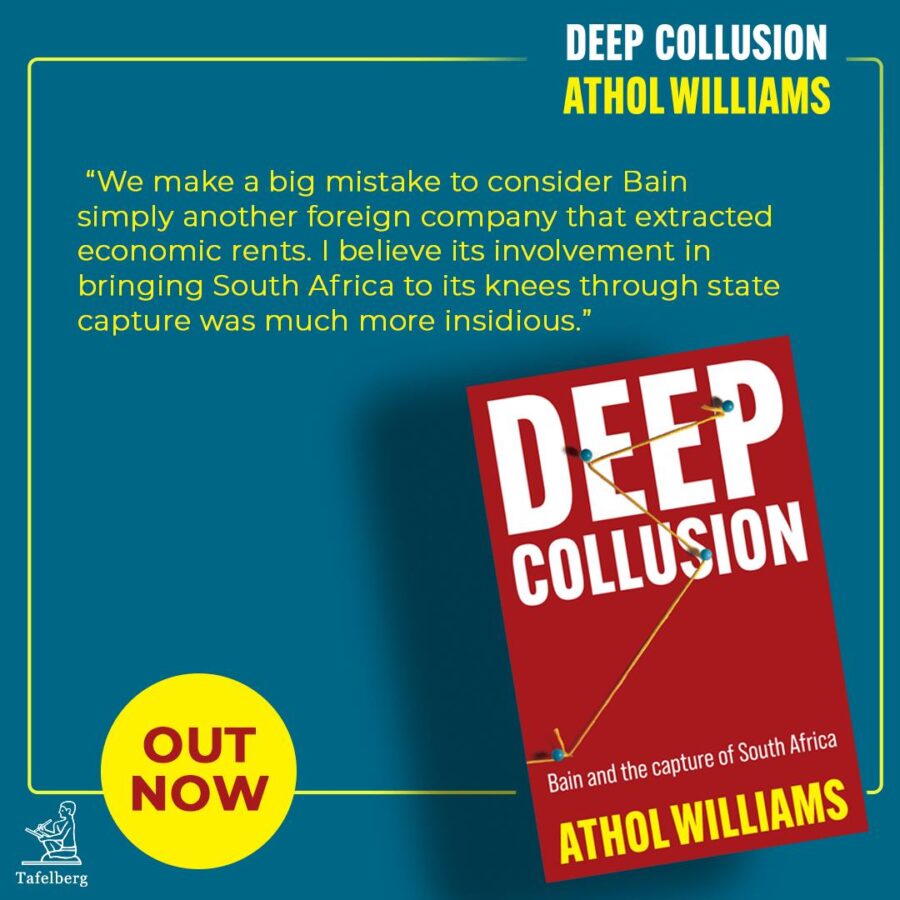