Japan’s fans are making as much news around the world as their team did with its historic 2-1 win against Germany in the FIFA World Cup on Wednesday. Photos and videos have gone viral showing the disciplined Japanese fans cleaning up their mess in the stadium, before going out to party and celebrate.

FIFA said: “It’s not only three points that Japan have in the bag. After their amazing win at the #FIFAWorldCup, @jfa_samuraiblue supporters stayed behind to help collect plastic bottles and clean up the stadium. ❤️  #Qatar2022 | #SaveThePlanet”

Some joked: “Japan will beat you and clean up the whole place, leaving the crime scene with no evidence.”

One fan explained: “Japanese never leave rubbish behind us. We respect the place.” Watch below as the cameraman is so touched and filled with respect:

Absolute class. They did it at the opening game too! pic.twitter.com/K7Hz9WtN7F

And it wasn’t just the football fans. The players tidied up too, cleaning up on and off the field!

“After an historic victory against Germany at the #FIFAWorldCup on Match Day 4… the @jfa_samuraiblue left their changing room at Khalifa International Stadium like this. Spotless.”

It’s not the first time. At the 2018 FIFA World Cup in Russia, the players did the same. 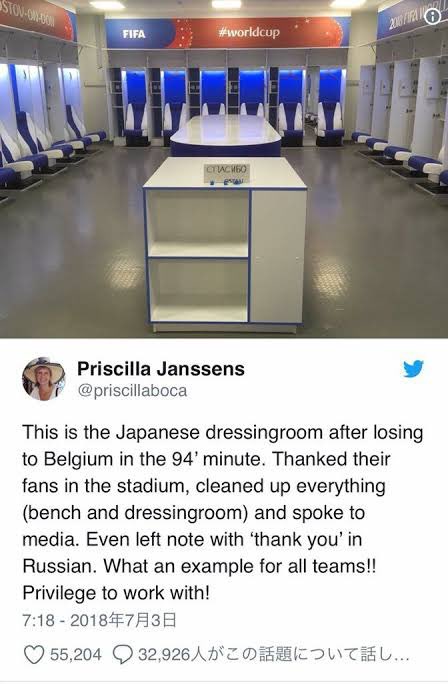 And in 2014 there were several photos of Japanese fans cleaning up after themselves:

Japan’s fans have always been polite

Japan’s fans have always been known for their good manners. Remember when Japanese supporters stood back at the Rugby World Cup in 2015 to let South African fans off the train first in England, after their shock 34-32 win against the Springboks. 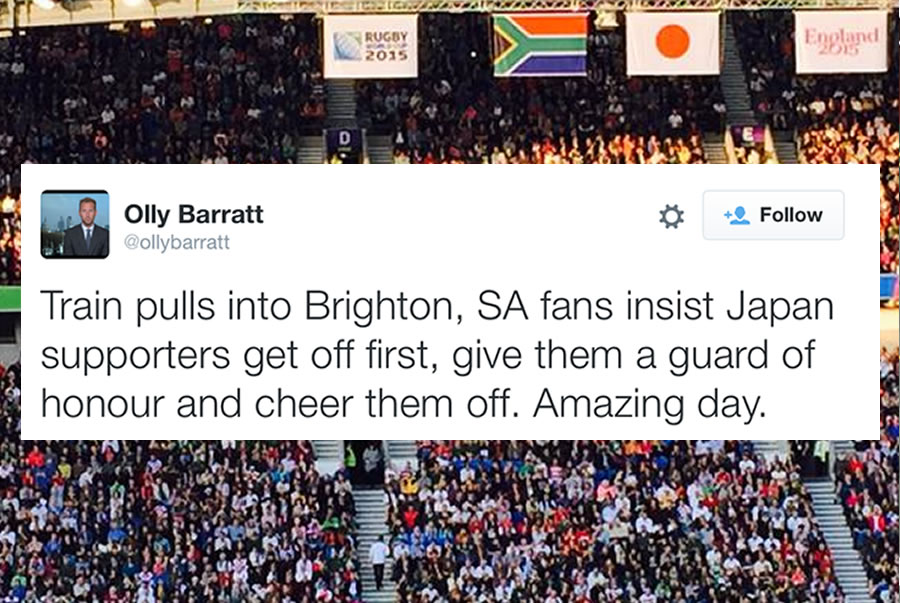 It’s not just the Japanese fans who are cleaning up so beautifully. @football_II55 captured this video of fans from Saudi Arabia and said: “In a wonderful and beautiful gesture; The Saudi fans clean the stands after the end of the match. ?”

Moroccan fans are the same. They cleaned the stands of Al-Bayt Stadium after tying with Croatia 0-0 yesterday:

FIFA – together with host country Qatar – is on a mission to save the planet, and deliver the most ambitious environmental programme in World Cup history in Qatar. They say they’re committed to helping ensure a legacy of climate action in the region and around the world. You can read more about their initiatives (including carbon management and free transport to ticket holders to reduce carbon emissions) here.

After cleaning up the Japanese fans did party and celebrate! Excited Japan fans were seen dancing and singing at the famous Shibuya Scramble.

But one thing’s for sure:

Japan has the most wholesome fans ?#FIFAWorldCup | #Qatar2022 pic.twitter.com/wkTJgJv4F3