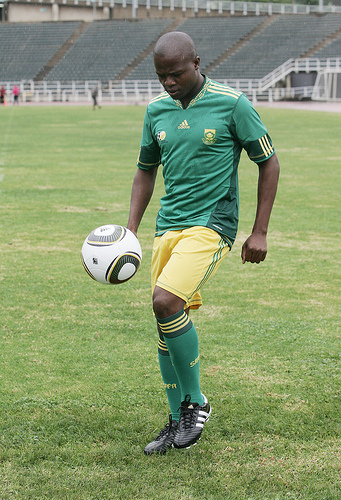 OK. We’ve waited years for it. And finally, the 2010 FIFA World Cup is almost here BUT do you know your team members? Here’s a  quick guide – BIG PICS and just the vital info – to help you get to know the Bafana Bafana guys that you’ll (hopefully!) be supporting over the next couple of weeks!

First, a word from our captain, Aaron Mokoena:
“We are all aware that it is a huge honour to play in a World Cup on home soil; not many players have had such a privilege. We are also aware of the task that lies ahead. For us, the World Cup is our priority, it’s our biggest goal.  We need to represent our country with pride.”

Khune is one of the most promising goalkeepers to appear in the past five years in South Africa. He doesn’t have a lot of experience at a high level, so this is an exciting opportunity for him.

He’s a very consistent goalkeeper, with the talent to kick with both his feet. In the past he has been accused of not being able to concentrate for an entire match. This will be a moment for him to prove himself. Nicknamed Slim Kat, he comes from Mitchell’s Plain and, as an asthma-sufferer himself, is an Asthma Ambassador in South Africa.

Shu-Aib is the biggest surprise inclusion in the team. This will be his first international game. Many were upset that he was chosen in favour of Rowen Fernandez, but Fernandez was injured and coach Carlos Alberto Parreira believes Walters has potential.

Nicknamed Mbazo, his football career began when he was discovered playing on the dusty streets of Johannesburg. He made his international debut just before turning 18 and still holds the record for being the youngest player to play for Bafana Bafana. He is also South Africa’s most-capped player of all time. He has played for a variety of European clubs.

Gaxa’s talent was discovered at an early age and he attended the South Africa-based FC Copenhagen School of Excellence. He’s versatile and hard-working, and the full-back was a star player in the FIFA Confederations Cup last year.

(seen on the left below)

Khumalo used the camp in Brazil recently to showcase his talents in the friendly matches. He’s one of those people who grabs opportunities with both hands. He was born in Swaziland and moved to South Africa at a young age.

(on the right below)

Described as being a “passenger” in the South African team for a long time, Siyabonga used the camp in Brazil to display some good solid performances which has secured his position in the World Cup team. He was born in Empangenie.

Last year he was dubbed the “mystery man” by the South African media who hadn’t heard of him before, but but the Capetonian has proved himself with a talent and composure that go beyond his years.

Tsepo is one of the brightest youngests in the team, who enjoyed a meteoric rise before he’d even signed a professional contract (which was a first for South African football). He has endless energy, and his playing in Israel has helped him become an even better player.

Lucas is one of the calmer players. He was injured at the last minute last year forcing him out of the 2009 FIFA Confederations Cup, so he’ll make the most of his chance to play this year. He’s a consistent and reliable defender. He can play both centre-back and left-back. (on right hand side of pic)

Booth is the tallest member of the squad and one of its veterans. When he takes to the field you’ll probably hear a loud noise that sounds like booing, but it will be the South African fans shouting “Boooooooth”. He has a tenacity and aerial ability. He made history in 2000 when he led SA’s first ever team at the Men’s Olympic Football Tournament (in Sydney). Davids was discoverd at just 18 by former coach Stuart Baxter in 2004. He has matured since then. He left SA at a young age to play for Munich in Germany, and later for a club in Sweden. He returned to SA football last year on a mission to secure a spot in the Bafana Bafana team and prove his worth. His playing has been up and down recently.

Teko has experienced that horrible fall from hero to zero which the media put him through last year, praising him before the FIFA Confederations Cup and chastising him afterwards. He admits it hurt, and that it was huge pressure to put such high expectations on him when it was his first international. This year he hopes to use the experience to prove his critics wrong. He’s great to watch. Very creative, good speed and a good eye for the goal.

Siphiwe is one of the most innovative and impressive of the Bafana Bafana players. He played for SA when he was only 20, receiving the call just eight months into his professional football career. He’s a speedy winger and a danger man in attack.

Pienaar is one of Bafana’s best talents. He’s innovative and hard-working. Since joining Everton in England he’s grown in confidence, and has a knack for scoring crucial goals. He’s a product of the South African School of Excellence and is currently South Africa’s most successful export playing overseas…which means a lot of South Africans are pinning their World Cup hopes on him bringing them to fruition. A lot of pressure!

Khuboni’s inclusion in the team was another surprise. He’s relatively unknown in SA and internationally. He was selected by the coach to improve the depth of the squad, and has so far impressed Parreira since joining the team. He’s Durban-born and has a kanck of controlling the tempo of the game while maintaining good position in midfield.

Kagisho is one of the SA team’s hardest-working members. He’s versatile, aggressive and inventive; and has attracted a lot of fans across South Africa. He has great physical strength and ball-winning abilities. Has suffered a few injuries this year.

MacBeth made his national debut nine years ago so he’s one of Bafana’s senior statesmen. He has played overseas for a number of clubs including those in Norway, Hungary and now Russia. He seems to be the unsung hero in the team.

Reneilwe has apparently “clawed” his way back to the national side for the World Cup. He’s unknown by many, but holds lots of promise. Born in Soweto, he is the product of Jomo Sono (one of SA’s best players and talent scouts). Letsholonyane is a workaholic and is great at scoring goals when it really counts.

Surprise had a knee injury that almost kept him out of the team. He’s SA’s “secret weapon” in times of desperation although he can lack consistency. Chances are that he will use the World Cup to make an impact since, at 30, he’s not getting any younger.

Six months ago Parker was being praised by the public. but since then he has struggled with his form and lost his footing. The World Cup will present him with the opportunity to prove himself again. He was born in Boksburg and has since moved to the Netherlands.

Mphela loves scoring goals and is viewed as SA’s most impressive player in the Premier Soccer League. He was the leading goalscorer. He burst onto the national scene at just 19 but has slowed down since then.

Nomvete was one of the forgotten ones who coach Parreira has plucked back into the team. His inclusion is still viewed as a gamble. Hemade his debut for SA in 1999 and has played for various clubs including those in Italy, Sweden and Denmark.

That’s it! Now you know the team. Send them a personal message! Click here. 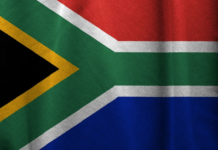 What are the Most Popular Sports in South Africa?