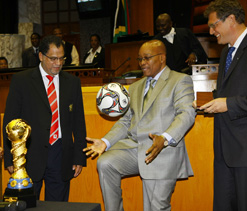 As South Africa enters its last week of hosting the 2010 Fifa World Cup, President Jacob Zuma has said in an interview with Fifa that his country’s organisation of the tournament has exceeded expectations – and confounded the sceptics.

Speaking at the presidential residence in Pretoria, Zuma discussed the legacy of the tournament, its effect on nation-building, and his favourite teams. This is an edited version of the interview.

Fifa: With only a week left in the 2010 Fifa World Cup, what are your impression so far of the tournament?

Jacob Zuma: I think the tournament is going extremely well and South Africans are happy. You just have to see the reactions of the people at the matches.

I must also say that the international community is happy about this tournament. I had an opportunity to be in Toronto at the G8 meeting and there was much excitement among other heads of state. I think we have proved that not only South Africa, but Africa is capable of hosting any major event.

When you were in prison on Robben Island, did you imagine that South Africa would host an event of this magnitude, and you would be in charge of the country when it took place?

I don’t think any of us imagined that. At that time we were campaigning for the isolation of apartheid South Africa. And when Fifa took a decision to ban South Africa, it was a significant step. We only dreamed that, one day, a free and equal South Africa would participate in international competitions. We never thought that South Africa, so early on, would host a World Cup.

In any case, when I was in Robben Island I never thought I would be president. It is indeed a humbling experience.

How important was it for South Africa to succeed at this Fifa World Cup, given the scepticism some have shown in its ability to do so?

I think it was very important for us to succeed. You must remember that, as South Africans, we pride ourselves on the fact that we always rise up to any challenge. As a matter of fact, nobody believed that we would have a smooth transition from apartheid – but we did it.

As you know, a Fifa World Cup has never been hosted in Africa. When South Africa first declared its intentions to host the World Cup, some people said, “What is this country from Africa thinking?”

Yes, we lost the first time (to Germany), but we knew we would do it the next time. That is what defines us as a country – our belief that nothing is impossible.

When we completed the stadiums, people started to talk about security and other issues, but we have had a great tournament. And today a lot of people who are honest enough have come out and said, “We were wrong about your country.”

The tournament has also been seen as an opportunity for nation-building in this young democracy. Do you think that has been achieved?

Absolutely, beyond expectations. It has been an important component of our nation-building. This is the first time we have seen this Rainbow Nation really coming together in a manner we have not witnessed before. For the first time, every South African is now flying our national flag. Everybody is just crazy about the tournament, both black and white.

Do you think that successfully hosting the 2010 Fifa World Cup will make it easier for the country to win bids to host other international events?

We have proved to the world that we are capable of hosting any international event, that we have the resources and infrastructure. People are already talking about the possibility of bidding for major events, such as the Olympics. I don’t see why we can’t bid to host the Olympics in the future. It’s important for Africa.

What lessons, as a government, have you learned from hosting the World Cup?

There are many. For one, we learned a lot about how to work with strict timelines. We have embarked on a lot of development and we had to work within a tight schedule in order to deliver on time.

You are known for your love for football. How many matches have you been able to watch, and which team has impressed you so far?

I have watched many games. I think this Fifa World Cup has been different. The football has been so unpredictable. Some of the countries who were favourites are now out of the tournament and the gap between the so-called big teams and other teams is narrowing.

Of course, there are countries that have played well. Even though Bafana Bafana did not qualify, I think we played good football. We were so close to qualifying.

I have been impressed with the Netherlands, Spain, Portugal and Germany. I think the Germans has reinvented their game: they are playing with so much speed and it’s good to watch them. And the teams from Latin America have been great: Brazil and Argentina are a pleasure to watch. In Africa, we are proud of Ghana – they have represented us well.

May we put you in the spot and ask you to predict the team that will win the tournament on 11 July?

It’s difficult to say, but I think the winner will be among the teams I have mentioned (laughing).

There is a lot of talk about the legacy of the 2010 Fifa World Cup. What legacy would you like it to leave for South Africa’s children?

Firstly, the world is aware that Africa has the capacity to host the World Cup. Everybody has seen that we are equal to the task. It has taken our economic development to a new level.

One of the important things for Africa is education and programmes like 1Goal are playing a vital role – that is legacy. The tournament has inspired Africans.