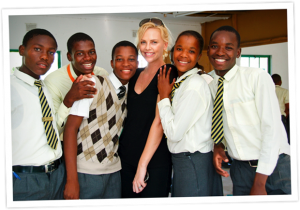 South African actress Charlize Theron recently shared a story about growing up in South Africa with some American press…and they’re still wondering why.

She recounted that her mom was quite strict and was often stressed doing the housework and so, in an attempt to keep clothes washing to a minimum, she told Charlize to change out of her school uniform before eating.

But Charlize – being a typical kid – grabbed a couple of sips of soup before changing…and of course, some of the soup spilled onto her uniform, meaning her mother would need to do the extra laundry.

To punish Charlize for her misbehaviour, her mum smacked her on the thighs with a wire coat hanger.

Charlize went on to say that that wasn’t the worst of it. On another occasion, when she’d behaved even worse, her mum smacked her with coathangers that had Disney character shapes. So Charlize landed up with rather painful Donald Duck and Mickey Mouse marks imprinted on her thighs.

But instead of being upset, Charlize was quite proud of her ‘war wounds’ and showed off the shapes to her friends at school the following day.