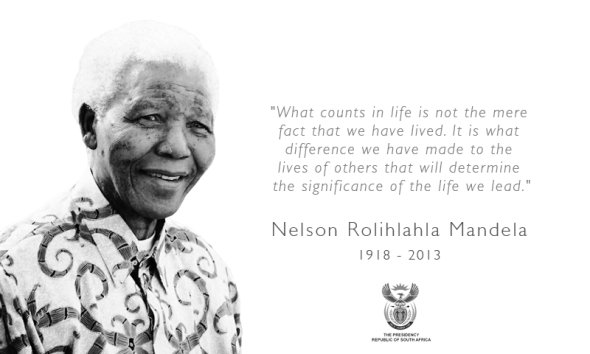 South Africa’s beloved Tata  Madiba – Nelson Mandela – has sadly passed away today, 5th December 2013, at the age of 95…leaving a legacy that will last many lifetimes. The Presidency has confirmed that the former South African president will be accorded a State Funeral, and that all the flags of the RSA will be lowered to half-mast tomorrow (6 December) and will remain so until after the funeral.

“What made Nelson Mandela great was precisely what made him human. We saw in him what we seek in ourselves,” said South African President Jacob Zuma in his address to the nation tonight.

It is ironic that for a man who spent a large part of his adult life unable to be quoted,  Nelson Mandela is one of the  planet’s  most quoted people:

“Death is something inevitable. When a man has done what he considers to be his duty to his people and his country, he can rest in peace. I believe I have made that effort and that is, therefore, why I will sleep for the eternity.”
– FROM AN INTERVIEW FOR THE DOCUMENTARY MANDELA, 1994

“It is in the character of growth that we should learn from both pleasant and unpleasant experiences.”
– FOREIGN CORRESPONDENTS’ ASSOCIATION’S ANNUAL DINNER, JOHANNESBURG, SOUTH AFRICA, 21 NOVEMBER 1997

“What counts in life is not the mere fact that we have lived. It is what difference we have made to the lives of others that will determine the significance of the life we lead.”
– 90TH BIRTHDAY CELEBRATION OF WALTER SISULU, WALTER SISULU HALL, RANDBURG, JOHANNESBURG, SOUTH AFRICA, 18 MAY 2002

“For to be free is not merely to cast off one’s chains, but to live in a way that respects and enhances the freedom of others.”

“Resentment is like drinking poison and then hoping it will kill your enemies.”

“A winner is a dreamer who never gives up.”

When American talk show host Oprah Winfrey interviewed Nelson Mandela in 2000, she found him to be the most inspiring and humble man she had ever met. The whole interview is worth watching, but Oprah reveals the extent of his humility at 1:50 where she explains what happened when he arrived at the studios.

My Fellow South Africans,
Our beloved Nelson Rolihlahla Mandela, the founding President of our democratic nation has departed.
He passed on peacefully in the company of his family around 20h50 on the 5th of December 2013.
He is now resting. He is now at peace.
Our nation has lost its greatest son. Our people have lost a father.
Although we knew that this day would come, nothing can diminish our sense of a profound and enduring loss.
His tireless struggle for freedom earned him the respect of the world.
His humility, his compassion, and his humanity earned him their love. Our thoughts and prayers are with the Mandela family. To them we owe a debt of gratitude.
They have sacrificed much and endured much so that our people could be free.
Our thoughts are with his wife Mrs Graca Machel, his former wife Ms Winnie Madikizela-Mandela, with his children, his grand-children, his great grand-children and the entire family.
Our thoughts are with his friends, comrades and colleagues who fought alongside Madiba over the course of a lifetime of struggle.
Our thoughts are with the South African people who today mourn the loss of the one person who, more than any other, came to embody their sense of a common nationhood.
Our thoughts are with the millions of people across the world who embraced Madiba as their own, and who saw his cause as their cause.
This is the moment of our deepest sorrow.
Our nation has lost its greatest son.
Yet, what made Nelson Mandela great was precisely what made him human. We saw in him what we seek in ourselves.
And in him we saw so much of ourselves.
Fellow South Africans,
Nelson Mandela brought us together, and it is together that we will bid him farewell.
Our beloved Madiba will be accorded a State Funeral.
I have ordered that all flags of the Republic of South Africa be lowered to half-mast from tomorrow, 6 December, and to remain at half-mast until after the funeral.
As we gather to pay our last respects, let us conduct ourselves with the dignity and respect that Madiba personified.
Let us be mindful of his wishes and the wishes of his family.
As we gather, wherever we are in the country and wherever we are in the world, let us recall the values for which Madiba fought.
Let us reaffirm his vision of a society in which none is exploited, oppressed or dispossessed by another.
Let us commit ourselves to strive together – sparing neither strength nor courage – to build a united, non-racial, non-sexist, democratic and prosperous South Africa.
Let us express, each in our own way, the deep gratitude we feel for a life spent in service of the people of this country and in the cause of humanity.
This is indeed the moment of our deepest sorrow.
Yet it must also be the moment of our greatest determination.
A determination to live as Madiba has lived, to strive as Madiba has strived and to not rest until we have realised his vision of a truly united South Africa, a peaceful and prosperous Africa, and a better world.
We will always love you Madiba!
May your soul rest in peace.
God Bless Africa.
Nkosi Sikelel’ iAfrika.

“We give thanks for his life, his leadership, his devotion to humanity and humanitarian causes. We salute our friend, colleague and comrade and thank him for his sacrifices for our freedom. The three charitable organisations that he created dedicate ourselves to continue promoting his extraordinary legacy.