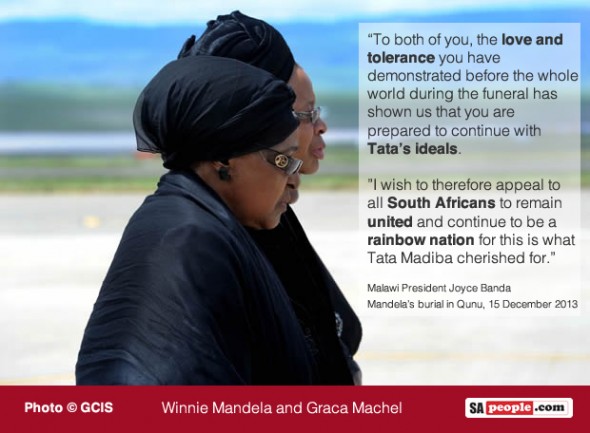 Malawi’s President Joyce Banda received a standing ovation during her inspiring speech at Nelson Mandela’s funeral today. In case you missed it, here’s a transcript below: I stand before you today to join you, the people of South Africa, and the world, to mourn the loss of a great leader: Nelson Rohlihlahla Mandela.

I join you, the people of this rainbow nation, to celebrate a life of one of Africa’s unique leaders who gallantly fought for freedom and peace for this great country and the world.

The first time I was privileged to meet Mandela was during his visit to Malawi in 1990, after his release from prison, when he came to meet the late President, Kamuzu Banda.

I was amazed with the humility in this great African leader.

In 1996, I was further privileged to be invited to visit Robben Island together with a team from Malawi. After the tour of Robben Island, I was greatly touched by the life and story of Tata Mandela and since then I sought to know and understand this great son of Africa.

In 1997, I met Tata Mandela at a Conference for Smart Partnership in Kasane, Botswana. I was inspired by this great leader who was focused, calm and collected.

In 2011, I had an opportunity to visit Tata Mandela at his home in Johannesburg. We had a very moving conversation. I was deeply touched by his spirit of forgiveness, his passion to put people first and courage. These attributes have greatly influenced my life.

After three years of isolation, humiliation and name calling, I found myself in a situation where I had to work with those who had desired to prevent me from becoming President of my country.

I had to forgive them without effort. Tata’s courage, determination, love and passion for his people inspired me on my journey to becoming the first elected woman President in my country.

It is about serving the people with selflessness, with sacrifice and with the need to put the common good ahead of personal interests. Today, I stand before you, on behalf of our regional grouping and family, the Southern Africa Development Community (SADC), to extend a collective hand of comfort to the Mandela Family, the Government of the Republic of South Africa, the African National Congress and to all South Africans on this irreplaceable loss of one of its true sons, Tata.

The passing on of Tata Mandela is not only a loss to South Africa, but also to the SADC Region, and indeed to the world. As we celebrate the life of this icon, it is also time to take stock of the things that Tata taught us during his time with us.

I know that much has already been said about Tata by those whose lives have been touched and inspired by his works. The SADC region will remember him for his wisdom and statesmanship; his humility and sense of humour; and his servant leadership style. Tata Madiba believed that all people are created equal.

The way he conducted himself, he saw no boundaries between and among the countries of the region. He championed the freedom of not only South Africans but also all Africans.

Tata Madiba taught us that even when the challenges of life seem insurmountable, with courage and determination, we can overcome the evils of our societies.

We in the SADC Region will remember Tata as a great reformer who championed the cause of humanity, deepening democracy and dedicated his life to selfless service, a man who worked tirelessly to promote national, regional and world peace.

We in the SADC Region, whilst mourning his death, we also see this as an opportunity to celebrate the life of a great Statesman, an icon from our region.

The life of Tata Mandela will continue to inspire those of us left behind, promote peace and security, deepen regional integration and work to support one another as it was during the fight against apartheid. We will strive to emulate Tata Mandela’s stature and spirit so that his legacy can live on.

The ideals of political, social and economic emancipation that he stood for will inspire us forever as a Region. In conclusion, I believe I am speaking for many within the region.

His call to get food for the hungry, to eradicate preventable diseases, to let people find their voice, and restore their dignity. These words will inspire SADC long after Tata Madiba is gone.

Our Dear Father and compatriot, Tata Nelson Mandela, fought a good fight and he finished the race well.

As an African woman and leader, I wish to acknowledge Mama Winnie Madikizela Mandela for her efforts and steadfastness for standing with Tata Mandela before and during Tata’s imprisonment and for being in the forefront of ANC’s struggle for liberation.

And to you, Mama Graca Machel, I wish to thank you for your visible love and care especially during Tata’s last days.

To both of you, the love and tolerance you have demonstrated before the whole world during the funeral has shown us that you are prepared to continue with Tata’s ideals. I wish to therefore appeal to all South Africans to remain united and continue to be a rainbow nation for this is what Tata Madiba cherished for.

It is our hope and prayer that South Africa will remain a country of all people regardless of race, colour, religion and tribe.

SADC will stand with you and look forward to a continued engagement in our joint efforts to deepen democracy and regional integration. It is now up to us as leaders, as citizens, as a Continent to continue from where Tata Madiba left, so that his legacy lives on, so that what he stood for, should not die.

May his soul Rest in Peace! I thank you.