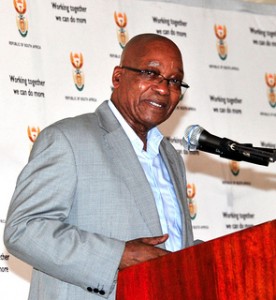 The problem arose while the President was speaking in KwaNyamazane, Mpumalanga. He told the audience how he used to infiltrate South Africa through their district in order to undertake underground political work.

He said these operations required “bewitching” the authorities. He was speaking in isiZulu, and used the word “ukuthakatha” (witchcraft) and it appears that some journalists did a translation that was a little too literal and instead of understanding that he meant “bewitching”, jumped to the conclusion that he was admitting to having used witchcraft.

In response to the media outcry, the Presidency published the following statement:

“The media reports that President Jacob Zuma used to practise witchcraft are ridiculous and misleading.

“The President, speaking in KwaNyamazane, Mpumalanga in isiZulu, related to the audience how, while operating in exile in Swaziland, he used to infiltrate South Africa through the KwaNyamazane area to do underground political work. Given the ‘cloak and dagger’ manner of such underground operations, they were referred to jocularly as “ukuthakatha” (witchcraft), which implied ‘bewitching’ the authorities by outwitting them.

“It appears that some journalists, who probably do not understand the isiZulu language, did a literal translation and lost the meaning.”