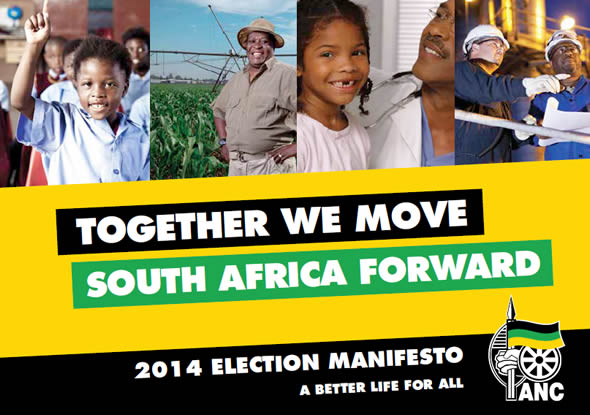 For those South Africans abroad who are eager to vote, but who may not have heard about or read the ANC’s  2014 Manifesto, here’s a quick guide to the main points you may have missed when it was launched last week. The Manifesto is dedicated to ANC co-founder and former President Nelson Mandela, Tata Madiba – “one of the greatest leaders ever produced by our people” and calls on South Africans to re-double our efforts to realise his vision” for a “better life for all, for a better Africa and a better world”.

President Jacob Zuma leads the Manifesto with a letter that reminds South Africans “it has been 20 years of freedom and democracy” and “the lives of our people have vastly improved and South Africa is a much better place than it was before 1994.”

The letter states that “over the last five years, the ANC has worked together with all South Africans to do more to fight poverty and unemployment and reduce inequality. Despite the negative global economic situation, we have built on the social gains achieved since 1994.”

The Manifesto acknowledges that the challenges facing SA are still immense, and that “bold and decisive steps” are required to place the economy on a different path. To this end the National Development Plan (NDP) aims to eradicate poverty, increase employment, create sustainable livelihoods and reduce inequality by 2030.

The Last Five Years (according to the Manifesto):

Over the Next Five Years, the ANC will (according to the Manifesto): The ANC pledge to move South Africa forward, together with the people of South Africa who each have a role to play from the communities, to workers to the private sector.

Amongst the ANC’s listed pledges are the pledge to “remain true to our values of courage, service, self-sacrifice, human solidarity, integrity, humility, honesty, hard-work, self-discipline and mutual respect” and to “act against ANC members and ANC elected representatives found guilty in a court of law.”

To read more, please click below to read the PDF versions of the Manifesto (Adobe Reader required):