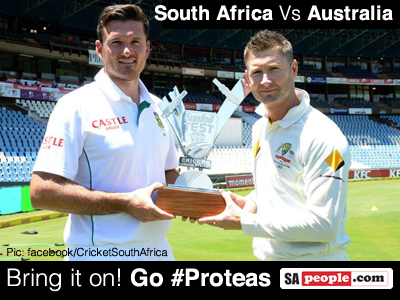 Australia’s captain Michael Clarke heaped praise on the Proteas during a press briefing ahead of today’s Opening Test at Super Sport Park in Centurion, and predicted it would be a tough challenge playing the SA team in “their own backyard”.

He said the South African cricket team had rightfully “earned the number one ranking ” and that he and the Australian team looked forward to the challenge. “They’re the best team in the world,” he said. “They’re extremely hard to beat anywhere in the world, but especially in their own backyard.

“That’s a challenge you want as a player. You want to be playing against the best to see how you are, how you measure up individually and also as a team.

“It’s a great challenge and test and opportunity.”

You can watch the full press briefing with Clarke and South African captain Graeme Smith below: