Two major wheelchair tennis tournaments are set to be staged in South Africa next month: the Airports Company South Africa (Acsa) Gauteng Open and the Acsa SA Open. Many of the world’s leading players will be in action.

The Acsa Gauteng Open will be played at the Gauteng East Tennis Centre at Benoni Lake from 23 to 27 April and is a grade one event, one of only 13 such tournaments in the world.

Top international players are expected to participate in the event, in preparation for the even more prestigious Acsa SA Open, which takes place at Ellis Park in Johannesburg from 29 April to 3 May.

The Acsa SA Open is a Super Series event, one of only six such tournaments in the world to hold that status. The other Super Series tournaments are played in Australia, France, Japan, Britain and the United States.

“It is a tremendous honour to be awarded such an important tournament,” Wheelchair Tennis South Africa (WTSA) general manager Karen Losch said in a statement on Wednesday.

“It is evidence that South Africa has been recognised as one of the powerhouses of wheelchair tennis. We expect stars from around the world to come to South Africa for the tournaments, and we hope the people of Gauteng will come in their numbers to support our players.”

South Africa boasts some of the world’s leading wheelchair tennis players, led by US Open quad champion and world number two Lucas Sithole, who finished as runner-up to world number one David Wagner in the Australian Open in January.

In the 2013 SA Open, Sithole beat Wagner on his way to the final where he lost to Andy Lapthorne. With that result, Sithole climbed to fourth in the world rankings and has since improved markedly.

South Africa’s number one female player Kgothatso Montjane, known as “KG”, is ranked seventh in the world, and is the defending champion in the Gauteng Open. She was also the runner-up in last year’s SA Open.

Evans Maripa is the world number 15. He was encouraged by Montjane to take up the sport in 2007. Just two years later, he won Gold at the Asia pAcirfic Youth Para Games in Tokyo.

As part of WTSA’s outreach programme, stars from wheelchair and able-bodied tennis will conduct a special clinic for schools on 30 April at Ellis Park. 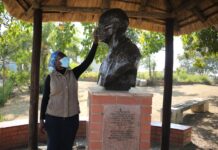