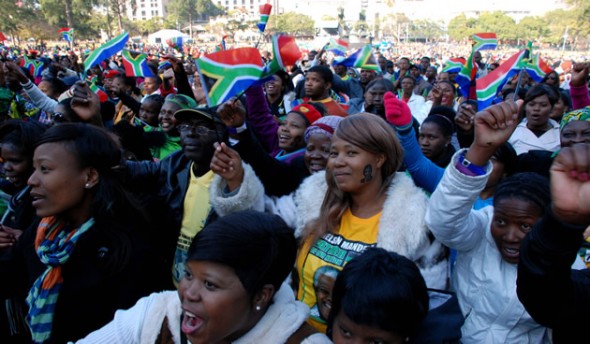 Today’s inauguration of President Jacob Zuma, which marks the start of his second and final term as state president, will be attended by around 20 000 people who will feast their eyes and ears on the best pageantry that South Africa has to offer.

But amidst all the pomp and ceremony that marks one of the biggest days in the democratic life cycle of the nation, representatives from the business community will be keeping one eye on the future. For the economy to grow and create jobs at any sort of scale, the ANC must use its renewed mandate to solidify and advance the gains that have been made over the past 20 years rather than deciding that now is a good time to move towards the kind of radical nationalistic transformation demanded by its critics.

The  ANC has promised it will stay the course, and so far the markets seem to believe it, but it will be very difficult for party bosses to ignore the threat posed by young firebrand Julius Malema and his Economic Freedom Fighters. In a very short space of time, and with only a fraction of the resources mobilised by the other parties, the EFF now has 24 MPs in the national assembly and there is no guarantee that it will do us all a favour by imploding the way Cope did after its strong run in the 2009 elections. In many ways this seems unlikely as the party, unlike Cope in 2009, has one clear leader rather than two who don’t like each other.

The fear is that if the ANC continues to disappoint the poor, and the EFF continues to grow by promising the earth (albeit with no real plan on how to deliver it), Mr Malema could well find himself back in the king maker role that he relished while he was running the ANC Youth League.

I am sure that the ANC recognises that, some successes notwithstanding, it must do significantly better with job creation and service delivery than it has if it is to hold off the advances by Mr Malema on one side of the political spectrum and the Democratic Alliance on the other.

If it continues on its recent trajectory the ANC could easily dip below the 50% mark in some of the provinces after the next elections in 2019. Should this happen, it would have to go into coalition and it is easier to imagine it in bed with the EFF than with the DA. A high price would be extracted and it would be very difficult for the ANC to hold its economically centrist line in these circumstances. And that wouldn’t be a good thing for anybody.

But that is all a long way off and, for today at least, we should celebrate the fact that we have had five peaceful elections and four presidents. Our system isn’t perfect but in many ways our post-1994 political scene has been quite remarkable.

It seems the markets are taking a sanguine view of recent political developments with the JSE inching to a new high for the second day in a row on Friday despite some investors heeding the maxim that nobody ever made a loss taking a profit which saw some selling off of SABMiller and Tiger Brands, two of the recent stellar performers.

According to Reuters, Lonmin, the beleaguered platinum producer at the centre of an extended strike, jumped nearly 4% to R45.23 on the back of hopes that negotiations between the company and workers would be successful. The talks are being mediated by the courts and it is expected that this will give them a better chance of success than previous efforts.