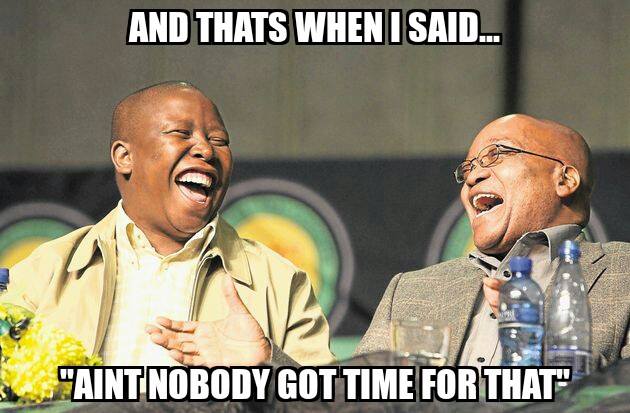 The President’s State of the Nation Address (SONA) is usually a very dull affair. Jacob Zuma gives off an air of grudging compliance and, because of its dominance in the house, the ruling party generally gets to take up most of the allocated discussion time with its bland, self-congratulatory platitudes.

Opposition parties have a chance to have a go and have tried in the past to gee up the process, but because our parliamentary system has tended not to be as openly adversarial as in, say, places like the UK, the whole thing has never really popped with real drama.

That all changed this week with Julius Malema’s maiden foray into parliamentary debate, if that is the right word for crude but effective character assassinations, blunt political attacks and a refusal to obey the rules of parliament.

Malema, the firebrand leader of the Economic Freedom Fighters (EFF), has set the tone of this new era and this is making him a social media sensation. He is winning fans amongst even those most disillusioned with the political processes.

But while it sets a dangerous precedent to allow people to abuse parliamentary privilege to score cheap political points, and while it is equally clear that Malema was way out of order this week, there was a certain unassailable logic to the main point that he was making, and this undeniably amped up levels of discomfort amongst ANC MPs.

After accusing the ANC, as opposed to the police or anyone else, of being responsible for the Marikana massacre in August 2012, Malema refused to withdraw or back down, despite being ordered by National Council of Provinces (NCOP) chair Thandi Modise to do so or be ejected from the chamber.

He was booted out and his EFF colleagues walked out with him, shouting “murderers!” and pointing out that Modise was the premier of North West when the Marikana massacre happened in August 2012. “You were the premier when people were killed!”, someone shouted. “Yes I was,” Modise replied.

According to Independent Newspapers, this will not be the end of the matter as Modise agreed to an investigation into the matter, as is permitted by parliamentary rules. ANC chief whip Stone Sizani’s office on Thursday night said it welcomed further steps against the EFF MPs and condemned “in the strongest terms possible the atrocious behaviour”.

And perhaps reinforcing why parliament has become so dull, Sizani said that such outbursts and gesturing had never occurred in 20 years of democracy and that “such abhorrent behaviour, disguised as ‘militancy’ or ‘radicalism’, makes a complete mockery of this institution (Parliament) and is contemptuous to the people of South Africa on whose behalf this Parliament exists”.

The fact that a still small political party was able to hijack the coverage and debate around SONA to the extent that it was is due, in part, to the fact that we have become addicted to soundbites rather than analysis, and this is something that Malema understands far better than most. He has honed the art of the cheeky headline-grabbing statement and he knows that if he is outrageous and provocative (as long as his point can be made in 140 characters or less) he will get the tweets, will set the trends and the newspapers will inevitably follow. We all like headlines that write themselves.

But it was also due to the fact that the speech itself was so dull.

But were we all so easily distracted that we missed things of great import in Zuma’s speech? Apart from his turgid and uninspiring delivery, have we done Zuma, and ourselves, a grave disservice by largely ignoring the contents of the first big policy statement of his second, and final, term?

In our rush to find the drama that Malema so effectively provided, did we miss out on hearing how he and his government are going to tackle issues like credit ratings downgrades, strikes, looming power outages, shocking educational outcomes, chronic levels of youth unemployment, and flagging confidence levels?

Unfortunately, the answer is a resounding “no!”. He didn’t even take the opportunity to spell out how his government was going to implement the National Development Plan (NDP).

Instead he stuck to the same tired plans which, while perhaps important, do not offer us the kind of rallying point that the country is crying out for. Tired words, like “repositioning”, “constraint”, and “broad-based” no longer cut it. Levels of cynicism are so high that it often doesn’t matter what is said – we now want to see, rather than just hear.

A niggling worry for me was that, amidst everything else that was said, Zuma outlined plans to embark on “radical socioeconomic transformation” – the exact words that Malema so often uses.

So far the ANC has avoided doing anything too radical, which is of great comfort to business and investors, but as journalist Sicelo Fayo pointed out on Facebook this week: “Is it just me or did I actually hear the EFF in Parliament yesterday offering and reminding the ANC that ‘We (EFF together with ANC) have a two-thirds majority in this country to change the Constitution to respond to the need for radical economic transformation!’”

Is there a greater alignment between the parties than Malema’s parliamentary antics would give us cause to believe? When the ANC decides that its political survival depends on acting rather than talking will it take Malema up on his offer?

I’d argue that, on the face of it, they are still too far apart to cooperate on anything as big as constitutional changes – and, to be fair, the ANC has shown no appetite for this so far.

But if the ANC continues losing ground in its core constituencies, it will struggle to hold the line. That will not be good. For anybody.

Julius Malema Kicked out of Parliament