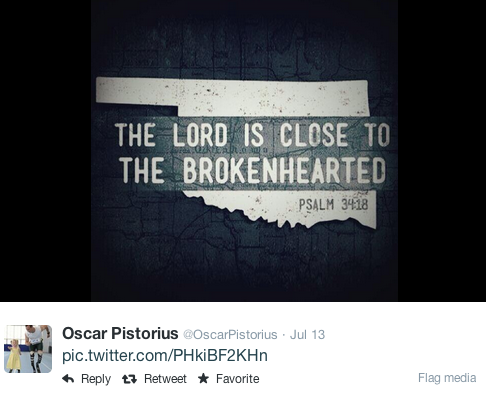 Oscar Pistorius broke his silence on Twitter a week ago. It had been five months since his previous tweet on Valentine’s Day when he wrote “a few words from my heart” and linked to a tribute he had written to his former girlfriend, model Reeva Steenkamp, whom he tragically killed a year previously on 14 February 2013.

Last Sunday and Monday he posted four photos on his Twitter account which again seemed to each be chosen deliberately in an attempt to either express his feelings to the world via his 362K followers…or to manipulate public opinion. Some international media have slated the messages as “pious” and “bizarre”.

The first message the former Olympian posted – which was an image displaying a quote from the Bible – said “The Lord is close to the brokenhearted”. He later removed this post. His next two messages included a collage of photos from a time when he was still South Africa and the world’s hero…along with the words “you have the ability to make a difference in someone’s life”. It is as if he was either trying to remind us of who he once was, or remind himself of who he wishes he still was. The other post included a passage from “Man’s Search for Meaning” by Victor Frankl, written while he was imprisoned in Auschwitz, with the words “the salvation of man is through love and in love” in italics; and a thumb is photographed (perhaps Oscar’s) drawing attention to the words “in front of me a man stumbled…”. The following day – Monday July 14 – he posted another image with a quote on it. This one said “Lord, today I ask that you bathe those who live in pain in the river of your healing. Amen.” He has not tweeted again since then.

Whether these are the musings of a troubled man, a cry for help and forgiveness, or an attempt to manipulate – there seems no question that it is not our job to judge him. We can leave that to Judge Thokozile Matilda Masipa who will hear the closing arguments of the case on the 8th and 9th of August.

Perhaps we should rather focus on making South Africa a safer place for women.

Perhaps the most important tweet is not that from Oscar, but one from Reeva written just days before she died.

On 10 February 2013, a day after the funeral of rape victim Anene Booysen (which Reeva had been following), Reeva tweeted: “I woke up in a happy safe home this morning. Not everyone did. Speak out against the rape of individuals…”

Just four days later Reeva did not wake up in a happy safe home. Perhaps the most we can do for her is to take heed of her words…