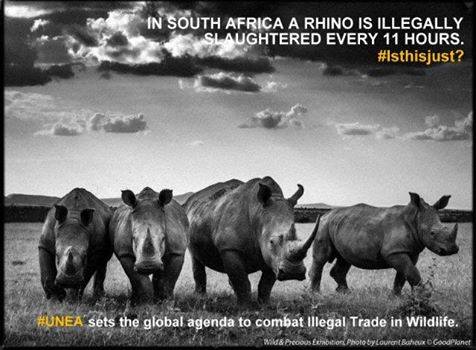 Four rhino poachers were captured in the Kruger National Park (KNP) yesterday, thanks to the efforts of three smart and very brave women! Haley Dahl, from Eshowe in KwaZulu-Natal, and her two friends Yolande Larkan and Delise Powell, were on a trip to the Kruger when they noticed a suspicious car.

Haley told East Coast Radio (ECR) that they were sitting at a waterhole watching a black rhino make its way down to the water where there had been a lion kill.

“Two minutes later there was  a car with four occupants that pulled up in front of us,” she said, “and, sjoe, they must have stayed for about two minutes. During that time they just took photos of the rhino and then went off.

“So I was very suspicious. We took photographs and kept the registration number.”

The men were in a blue Mazda and had only been interested in photographing the rhino which was hardly visible compared to the lions.

“And about an hour later we ended up following them on the road to Satara. And there were [now] only two occupants left in the car,” said Haley. “So we realised then that they must have dropped two off in the bush. So we phoned all the authorities, the hotline, and they apprehended four poachers!”

When the men pulled in to a garage near Satara for petrol, Haley and her friends were able to alert officers in an army truck at the garage.

Haley said it was very exciting at the time and their “adrenaline was flowing…but sjoe, we’re just relieved we managed to save the life of the rhino.”

Haley is passionate about South Africa’s wildlife. She visits game reserves when she can and regularly posts anti-poaching and pro-conservation messages on Facebook, including a message in July thanking the Australian government for its decision to ban trophy hunters from bringing home rhino parts to Australia.

Haley and her friends followed the alleged poachers’ car yesterday for about 20 km.

“We just stayed onto them,” she told ECR, “because we didn’t know where they would turn off, and because we wanted to report them we needed to give some sort of direction of where they were going.”

She said that after getting hold of the Hotline number and reporting the suspicious activity, the authorities got onto it immediately and “in no time at all they gave us feedback, said they caught all four of them, and they were definitely rhino poachers.” According to reports, the two men in the car were held at gunpoint by officers who succeeded in getting them to reveal the location of the other two poachers.

Haley added that she and her friends “feel really, really privileged. There was three of us girls and we felt strong and very very brave.”

The tip-off from Haley and her friends comes just days after the Department of Environmental Affairs released the latest Rhino Poaching stats, and called on all South Africans to work together to combat rhino poaching.

In a statement released on 12 September, the department said: “The call for communities to embrace the rhino as an important contributor to tourism and as a heritage icon in South Africa comes as the number of rhino poaching for their horns since January 2014 increased to 769, with 227 people arrested countrywide.”

KNP continues to bear the brunt of rhino poaching in South Africa, having lost 489 rhino so far in 2014. A total of 103 rhino have been poached in Limpopo, 65 in KwaZulu-Natal, 47 in North West and 43 in Limpopo.

“Rhino are part of South Africa’s shared heritage,” said the Department. “The rhino is a key member of the Big Five and part of the reason millions of tourists travel to South Africa annually. The influx of tourist to enjoy the country’s natural heritage contributes not only to job creation and benefit for communities living adjacent to national and provincial parks, and private game reserves and lodges, but to the economy as a whole.

“As the country approaches the World Rhino Day on 22 September and Heritage Day on 24 September, the Department of Environmental Affairs calls on all communities to join hands in ensuring the survival of not only the rhino as an important ecosystem contributor, but also of the plants and other wild animals being decimated by international crime syndicates.”

So thank you Haley Dahl and your friends for leading the way!!!