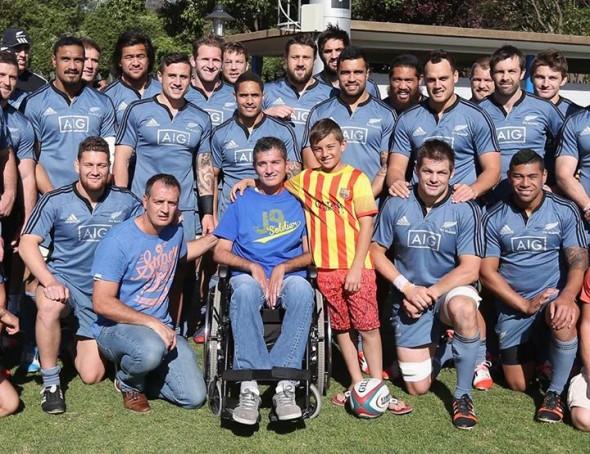 Here’s the video (below) behind what has to have been the photo of the week…when Joost van der Westhuizen visited the All Blacks during a rugby training session in South Africa this week.

The All Blacks take on the Springboks right now at Ellis Park Stadium in Johannesburg. (Go Bokke!!!!)

Let’s hope the Springboks perform as well as they did last week when they beat the Australians 28-10 at Newslands in the Western Province.

Springbok coach Heyneke Meyer said a few days ago that “at hooker, we’ve decided to rotate Bismarck with Adriaan Strauss, both of whom must rate amongst the best hookers in the world at the moment.”

This will be English referee Wayne Barnes’ 10th Test involving South Africa – in which the Springboks have won six of the Tests. The last time he refereed SA was in November 2013 when the Boks beat the French at Stade de France in Paris.

Today’s match will be Springbok captain Jean de Villiers’ 50th appearance in the Castle Lager Rugby Championship, which is the most by any South African.