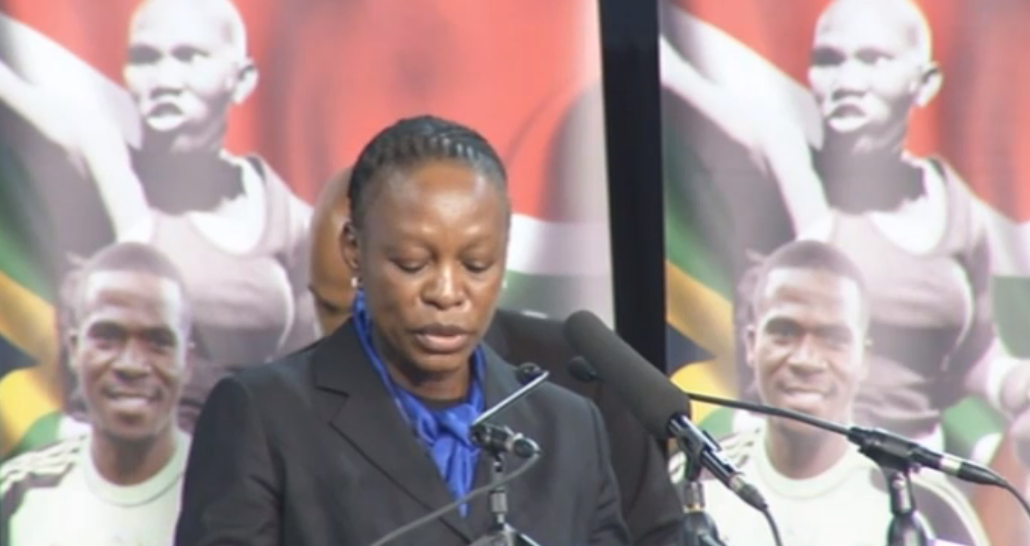 Olympic athlete Mbulaeni Mulaudzi was killed when his car overturned on the R555 in Mpumalanga on Friday. The 800-metre runner had overcome an injury to win a gold medal in the 800m race at the 2009 World Championships in Berlin, Germany.

Mbulaeni also won a silver medal for the 800m at the Athens 2004 Olympics and took gold at the Manchester 2002 Commonwealth Games.

Phindile had been knocked out during a fight against Liz Butler in Pretoria on October 10. She slipped into a coma and never recovered.

Today’s joint memorial service, attended by various dignitaries and personalities including Winnie Mandela, as well as many sports fans, is taking place at the Standard Bank Arena in Johannesburg.

President Jacob Zuma has expressed his heartfelt condolences on the untimely death of professional boxer, Ms Phindile Mwelase, who passed away on Saturday, 25 October 2014, after being in a coma for two weeks.

She passed away at the Steve Biko Academic Hospital after being hospitalised following a boxing match.

“On behalf of the government and all South Africans we wish to convey our earnest condolences to the family, relatives, friends and the entire boxing fraternity. The passing of Ms Mwelase is an enormous loss to our sport in general and to boxing in particular. She joined a sport that is predominantly male, and was proving that women can also succeed in boxing. Her untimely passing has robbed us of a role model. May her soul rest in peace,” the President said.

President Jacob Zuma has expressed shock, sadness and outrage at the death of South African National Football Team, Bafana Bafana and Orlando Pirates captain, Mr Senzo Meyiwa who was gunned down in Voslorus in the south of Johannesburg last night.

“We mourn the death of this young footballer and team leader whose life has been taken away at the prime of his career. The law enforcement authorities must leave no stone unturned in finding his killers and bring them to justice. Words cannot express the nation’s shock at this loss. We wish to extend, on behalf of government and all the people of South Africa, our words of condolence to his family and relatives, his friends and peers in the football game, his club Orlando Pirates and our national soccer team as well as the football fraternity as a whole. May his soul rest in peace,” said President Zuma.

President Jacob Zuma has learned with shock and sadness of the passing of South African Olympics hero and gold medalist Mr Mbulaeni Mulaudzi, who died in a road accident this afternoon on his way to an Athletics South Africa (ASA) meeting in Johannesburg.

“The nation has lost a true hero and one of our most disciplined and talented athletes who flew the South African flag across the sporting globe. We wish to convey, on behalf of government and the entire country, our heartfelt condolences to his family, ASA, the South African sports fraternity and the International Olympics Committee. May his soul rest in peace,” said President Zuma.