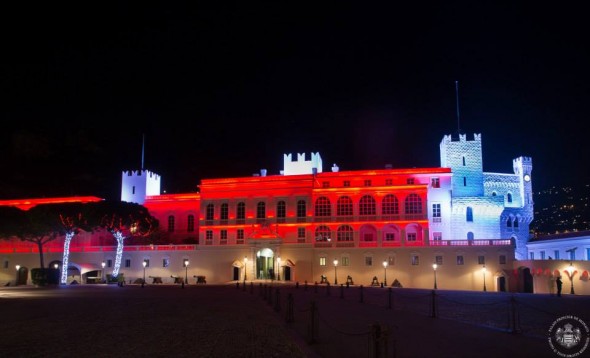 The Palace of Monaco was lit up last night to celebrate the birth of twins to the Principality’s royal couple – South African Princess Charlene and Prince Albert II of Monaco. The birth took place yesterday evening at the Princess Grace Hospital on the hill overlooking Monaco.

The palace has announced that the former Olympic athlete and her babies – a son and a daughter – are “doing well”.

In a statement last night, the palace announced “it is with immense joy that TT.SS.HH the Prince and Princess of Monaco have the great pleasure to announce the birth of Their children named:
– Gabriella, Thérèse, Marie (born at 17h04)
– Jacques, Honoré, Rainier (born at 17h06).”

Charlene’s son will be first in line for the throne even though he was born second.

The Palace said “the Prince Jacques, Honoré, Rainier is the Crown Prince. In accordance with the historic custom established by the treaty of Péronne (1641), He shall receive the title of Marquis of Baux (in Provence).

“The Princess Gabriella, Thérèse, Marie, second child in the line of succession, shall receive the title of Countess of Carladès (in Auvergne).”

The fact that the Princess was expecting twins was first announced to the world by Carte Blanche presenter Derek Watts after Charlene’s proud father revealed the news to him.

To celebrate the birth of the twins, the following will take place in Monaco:

South Africans will be sure to celebrate too. The royal couple has encouraged donations to charity rather than gifts. All funds received will be redistributed to the charities and associations of the couple’s choosing.

Full information on donation payment methods is still to be announced.