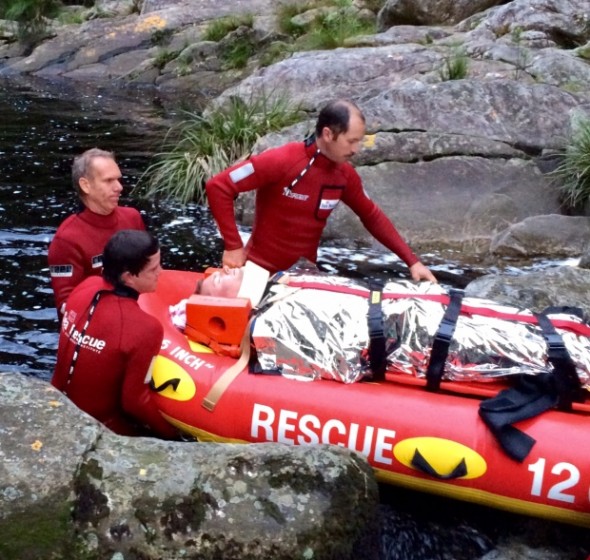 A letter of thanks from an injured Dutch tourist to the National Sea Rescue Institute (NSRI) in South Africa [see below] has touched the nation, gone viral on social media, and filled SA citizens with immense pride in the country’s rescue workers, many of whom are volunteers.

The incident occurred last month, on 10 November, when a 31-year-old orthopaedic surgeon from Amsterdam was injured in a remote part of the Drupkelders hiking trail, near Rheenendal, in the Knysna SA National Parks forest.

The Dutch tourist, Dennis, and his 26-year-old partner (a general surgeon herself), were being led by a river guide when Dennis jumped into a rock pool and sustained a compound fracture to the lumbar spine.

The injury was such that Dennis could not be moved for fear of complicating the injury.

While Drupkelders is a relatively short hiking trail of only 3.6km, it involves vertical cliff traversing making it a barely accessible and remote area.

The guide therefore had to leave the couple and hike the vertical cliff trail to reach an area where he had a cellphone signal to raise the alarm. The SA Police Services, WC Government Health EMS and an NSRI Knysna rescue team responded to the call from the remote location on that Monday afternoon.

According to the NSRI, “on arrival at the parking area, in overcast weather conditions, rescuers were met by the guide and hiked a kilometre down steep vertical cliffs to reach the Goukamma River and from there 6 NSRI Knysna rescue swimmers, accompanied by the river guide, then swam upstream searching for the two hikers. The swim upstream involved going over numerous waterfalls.

“A kilometre upstream the two hikers were found with the injured man in a serious condition.

“Full C-Spine immobilisation was applied and the man was loaded into a specialised floating Stokes Basket sea rescue stretcher and gently swum down stream, with special care being taken to get down the numerous waterfalls, and in some instances with no other option, because of the steep rocky cliffs and the barely accessible terrain, required floating the stretcher over the waterfalls, to reach where the Police and EMS paramedics were waiting a kilometre downstream.

“Paramedics then treated the man, and intravenous therapy and pain medications were administered and with the injured man in a stable but serious condition a rope and pulley system was rigged to haul the stretcher a kilometre up a steep cliff to reach the parking area.”

A Medlife ambulance transported Dennis to hospital in a serious but stable condition, accompanied by his partner.

Before being discharged and leaving South Africa, Dennis wrote the following awesome letter to the Knysna Rescue Crew:

I’m leaving the hospital today and will be transported back to Amsterdam. Could you please forward my message to the guys (NSRI, Metro and police) who were involved in my evacuation out off the Drupkelders?

I’ve never been in South Africa before. And up to two weeks ago I would associate South Africa with: Nelson Mandela, good food, wines, the big five, and of course beautiful nature.

During our holiday we visited museums and read about Madiba’s intriguing life and South Africa’s past. We tasted great food, along with tasteful South African wine, always served with extraordinary hospitality. We saw two of the big five in the beautiful Addo Elephant Park. We visited the marvellous Table Mountain, enjoyed the stunning view from the Lions Head and experienced the spectacular Drupkelders in Knysna National Park.

After kloofing upstream through the magnificent canyon and climbing up some waterfalls I got injured while jumping into the water. Bad luck it was, because the water was deep enough, there were no rocks nearby and many people have made this jump before without any problems. Luckily the guide and my girlfriend could drag me out of the water. Now what would you expect while lying injured on a rock, being in the middle of nowhere? I expected nothing, I just hoped that somebody, somehow, would be able to get me to a hospital.

The guide raced down the canyon in world record time to get help and brought back the heroes of the National Sea and Rescue Institute (NSRI), Metro and the SA Police. The job to be done? Getting me safety off several slippery waterfalls varying from 1 to 4 metres, this with me strapped on their life boat.

Furthermore getting me up a 45 degree angle steep hill through a dense forest. I now am aware that NSRI are volunteers. You guys not only sacrificed your free time to rescue me, but also invest your time in training, which makes you capable to perform these operations.

From my stretcher I could see you sweating from the extreme work you were performing. Moreover I could see you guys slip and fall due to the terrain, but you always made sure I did not. You really put other people’s life and welfare before that of your own.

I want to thank all who were involved in the rescue operation for all you did to get me out of the canyon. I also want to tell you how much I appreciated your visits in the hospital. Of course I’m also very thankful to the guide, police, the ambulance and the nurses and doctors of the hospital.

Despite my injury I am very glad that I visited this beautiful county, and moreover I am happy I’ve met all these special and so very caring people. From now on I will associate South Africa with: Nelson Mandela, good food, wines, the big five, beautiful nature and the most sincerely caring people of the world.

To all those who volunteer in South Africa…thank you. We truly appreciate the work you do. And to Dennis from Amsterdam for taking the time to say thank you…thank you. Please visit our shores again.

View the original letter on the NSRI’s site here.

TO REPORT A SEA RESCUE EMERGENCY DIAL 112 FROM A CELLPHONE