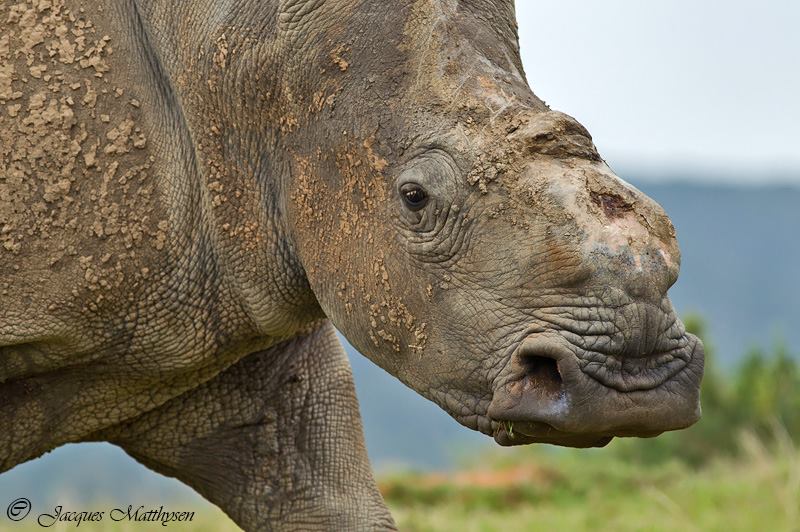 There is happy news from the Bush today. Thandi, the female rhino that survived a horrific poaching attack almost three years ago, gave birth to a calf this morning at 08h50.

The birth took place at Kariega Game Reserve where two rangers witnessed the joyous event. Shortly afterwards wildlife veterinarian Dr William Fowlds observed the mother and her calf from a distance, and confirmed that both are doing great!

Dr Fowlds – who is from the Investec Rhino Lifeline – has been a part of Thandi’s recovery since that first tragic day when she was brutally attacked by poachers.

During the attack on 02 March 2012, poachers used a machete to savagely hack off the horns of Thandi and two male rhinos. The animals were left to bleed to death. They were discovered unable to move and in terrible pain. One of the bulls  died from his injuries but the other two managed to cling to life and were treated by Dr Fowlds from the start.

Thandi and the surviving bull Themba became household names in South Africa while they were both monitored as they struggled to survive. Sadly Themba passed away a year later, in March 2013.

In the past couple of years Thandi – whose name means courage or to be loved in isiXhosa – has endured several operations, including pioneering skin graft surgery under the care of Dr Fowlds.

Today the veterinarian said: “I am sure that the whole rhino caring community will share in the joy of this amazing birth. Thandi’s story has always been an incredible testimony of the will to survive against all odds.

“She represents so much of what her species faces under the current poaching crisis. Her survival has already given us inspiration but the birth of her calf brings a new dimension of hope to the crisis, showing us that a future generation of life is possible if we put our minds and hearts to it.”

South Africa has the largest population of rhinos in the world. However, figures compiled by the South African Department of Environmental Affairs show a dramatic escalation in the number of rhinos being poached.

During 2014 a staggering 1116 rhinos were killed. Over the past five years 3569 rhinos have died at the hands of poachers.

Alan Weyer, General Manager of the Kariega Game Reserve, said: “We have been waiting for this day since we first discovered that Thandi was in the third trimester of her pregnancy in December 2013.

“It is incredible that the rhino we found so close to death nearly three years ago is now the mother of a beautiful calf. Thandi has shown huge resilience in her fight to survive. We are absolutely thrilled.”

Blood tests revealed that Thandi was pregnant in December 2013. The veterinary team estimated that she would give birth in December 2014. The gestation period of a white rhino is between 15 and 16 months. All those involved in Thandi’s dramatic story of survival have been waiting anxiously for the birth for the past month.

For the safety of Thandi and her calf the area is off-limits to all visitors. It is of most utmost importance that both rhino are left undisturbed to ensure that the calf has the best chance of survival.

Wildlife photographer and filmmaker Adrian Steirn arrived at the reserve last night and was able to photograph the mother and her baby immediately following the birth. Steirn is the WWF Photographer-in-Residence for South Africa and has documented the fight against poaching across Africa for many years.

He said: “I have been photographing wildlife for years but to have been able to capture this incredible moment was a once in a lifetime experience. Thandi’s story has captivated the world since she became a beacon of hope in the fight against rhino poaching. To see her with a beautiful, healthy calf is truly a privilege and should inspire optimism and renewed commitment to protect these incredible creatures.”

Kariega Foundation patron and Kariega Game Reserve co-owner Graeme Rushmere added that “Thandi’s calf is a real reward for her courage and everyone’s unbelievable efforts in saving and caring for her. We are so grateful for the incredible support that we have received from individuals and organisations across the globe. Thandi has become an amazing ambassador for rhino and for the many dedicated people fighting the war to end rhino poaching. We are simply delighted.”