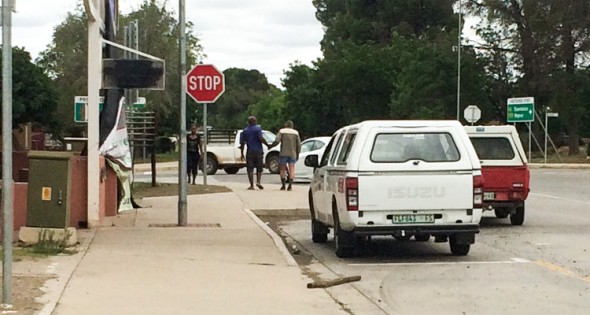 There’s a trend emerging in South Africa of spotting selfless acts of kindness. And with social media as it is, these acts which in the past would go unnoticed – or certainly unshared – are now being spread faster than a viral video on load shedding. And each one brings hope. The latest story comes from DJ Matt Suttner of Sly Creative Labs who noticed the following tender scene in a small town called Smithfield in the Eastern Cape…

With Matt’s kind permission, we hereby re-publish his article:

I thought with all the crap that’s going on around here you might need to hear this story. On our way down to the Eastern Cape over December we stopped for a smoke and a leg stretch in a little town called Smithfield. We pulled over on the main drag of the town (which consists of a few restaurants, a post office and not much else) and took a few minutes to chill on the side of the road.

After a little while I noticed an old white guy walking very slowly along the opposite side of the road.

Having just come from the city, the bystander effect so typical of Jozi people kicked in and I automatically assumed the guy was ok…“shame” I thought, “he’s probably having a nice walk, getting some exercise the old chap”.

I’m ashamed to say I didn’t give it another thought because, well, we exist in a city where so many people are crying for help, we learn to look the other way very effectively.

I didn’t even notice when the man stopped and looked in trepidation at the probably really intimidating task of crossing the road, that is until a bakkie stopped.

The red bakkie in the picture above was driving down the same road and suddenly screeched to a halt, stopping in the middle of the road. The driver, a black guy probably in his early 40s, got out and without hesitation walked across the road and carefully offered his hand to the old man, who accepted looking relieved. The gentleman in the bakkie took the old guy’s hand and not only helped him across the road but walked him all the way into the post office while his car’s engine ran.

Who knows, maybe they knew each other and were old friends, but I’m pretty sure they weren’t. Kim and I literally shed a tear on the side of the road in a little town called Smithfield in the Free State, and left soon after.

I snapped this picture but didn’t want to get too close and invade a beautiful moment.

It’s easy to get swept up in all the negativity in SA at the moment, and certainly, we should be fighting back against anyone who tries to oppress or violate the rights of anyone else, but it’s good to step back once in a while and realise that there are good humans out there.

One day maybe we can be like bakkie guy, and just look after each other.