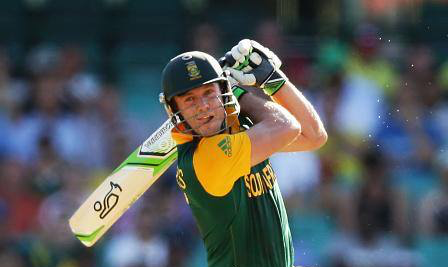 Proteas captain AB de Villiers has set Twitter aflutter after his awesome performance on the field today in Sydney, achieving the fastest 150 runs in One Day International (ODI) history and helping South Africa break records and reach the highest ODI score ever made on Australian soil!

There has been an outpouring of messages for AB, calling him “Captain Fantastic”,  “oh captain, my captain” and “Abraham Benjamin de Villiers – you Legend!” One message (from ‏@AshrafGarda) even suggested South Africa “should seriously consider getting #ABDevilliers to fix our poverty, energy, race, xenophobia, unemployment and crime problems”.

This was #ProteaFire at its best with its captain leading by example and inspiring youngsters around the country.

Remarkably, AB almost didn’t play today after being ill last night. According to CSA “he was suffering from gastro and fever the whole of last night. What a champ!”

After coming off the field at Sydney Cricket Ground, de Villiers did admit to “a bit of pain from the previous game” but added “we wanted to do well today.”

He stressed that “Hash and Faf did well to lay the foundation up front. A little bit of luck here and there and I made it count. Rilee played an exceptional knock as well…”

South Africa finished with 408/5, the highest team total ever in Australia in a ODI. It was also South Africa’s highest total in World Cups according to CSA.

With the match now in the second half, West Indies is batting. The “GayleForce” Henry Gayle has already been bowled out (or “ABBOTToired” as some have tweeted) by South Africa’s Kyle Abbott.