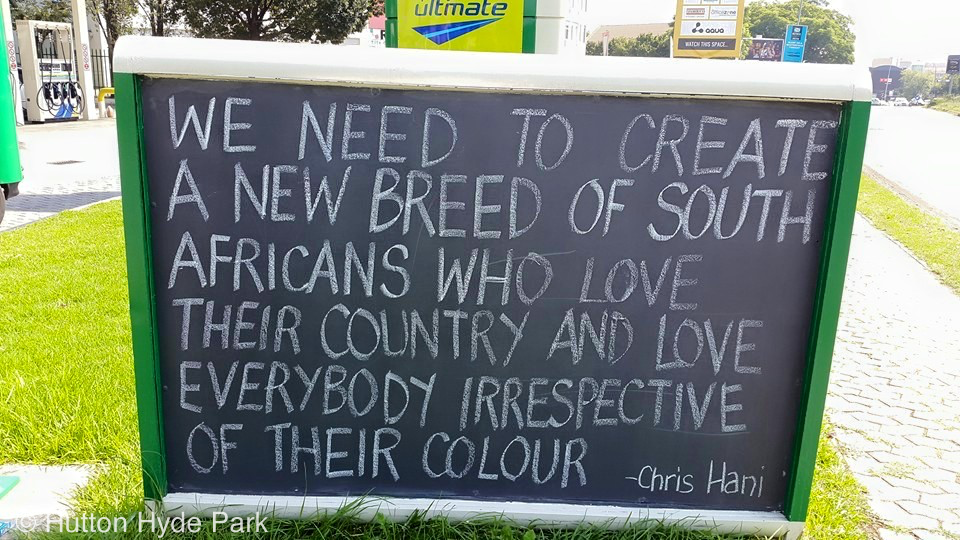 On the 22nd Anniversary of the assassination of South African Communist Party (SACP) leader Chris Hani, President Jacob Zuma used the opportunity to reaffirm that South Africa belongs to black and white people, and to address the vandalising of statues and treatment of foreign nationals.

The struggle stalwart was assassinated on 10 April 1993 outside his home in Dawn Park.

Today’s unveiling of the Chris Hani Memorial and Walk of Remembrance Monument took place in Boksburg, in Ekurhuleni (which has dubbed the month of April as the Chris Hani month).

President Zuma described Hani as the “leader of the ANC and SACP and our people as a whole and a soldier and chief of staff of Umkhonto Wesizwe” and said Hani had “dedicated his life to the struggle for freedom, equality, justice, human dignity and a better life for  all the people of South Africa.”

Zuma said that in celebrating the life of his comrade Hani  “we reaffirm that South Africa belongs to all who live in it black and white, and that no government can justly claim authority unless it is based on the will of all the people” (echoing the opening words of the Freedom Charter.)

Later he reiterated that “we must also double our efforts to build reconciliation, unity and social cohesion amongst all our people so that everyone, black and white, would continue to feel welcome and at home in South Africa.”

The President said that with the renaming of roads and airports, amongst other things, the ANC is introducing a new national identity for a newly liberated society.

Amongst the new sites which the government has selected to be turned into Heritages sites are:

On the topic of the statues, the President said “we are aware of the sentiments in the country relating to the removal of statues of racists and colonialists. We do understand the frustration of our people who may feel the programme of building a new heritage architecture is moving slowly.

“What is important is that everything must be done in an orderly fashion and according to the laws of the land.

“We remind our people that the destruction of statues is illegal. The National Heritage Resources Act of 1999 outlines the consultative processes that should be followed in the case of a removal and or relocation of a statue.

“Destroying the statues also flies in the face of the preservation of the history of our country, including the repulsive apartheid colonial history.

“Future generations should know the people who colonized our country and those who introduced apartheid which was declared a crime against humanity by the United Nations, and treated the black majority as pariahs in the land of their birth.

“What we should discuss is therefore the location of these colonial and apartheid artefacts and we are happy that the debate has begun.”

On foreign nationals being attacked and threatened, the President said there has been a “creeping problem of what appears to be xenophobia in our country”

He said that while the government is attending to the problem of illegal immigrants and that illegal traders in townships for instance will not be tolerated (and should be reported not attacked), “we would like to correct the perception that all foreign nationals or persons born outside South Africa who live in our country, are in South Africa illegally.”

He pointed out that many foreigners live in SA legally and “contribute to the life and success of the country. Many are recruited to bring much-needed skills that are scarce in our country that we need to develop our economy.

“We are actually working to improve our migration laws to enable us to import scarce skills which will entail bringing in more foreign nationals to assist us in achieving our development goals.

“Other foreign nationals come to South Africa as refugees running away from violence or wars in their countries of origin.”

President Zuma said SA’s national interest is linked to the entire continent’s stability and “we will continue to protect all the people in our country including foreign nationals” and urged South Africans to “treat those who are in the country legally with respect and Ubuntu.”