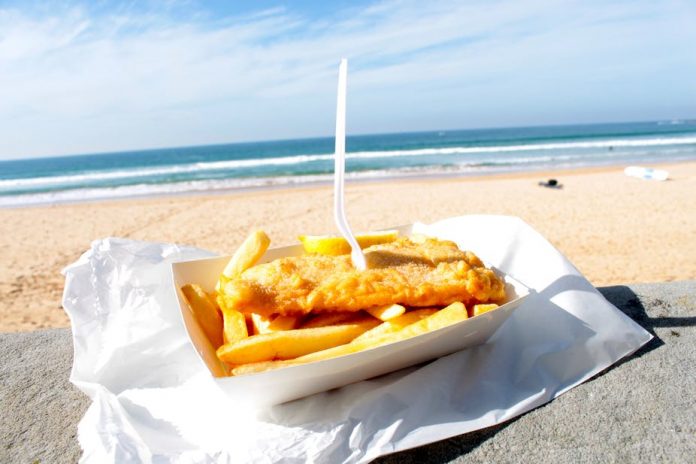 The week before last, I (John) had an appetite for fish and chips. But as I stood at the counter my desire for a sustainable lunch started to make things rather complicated. The names of the fish on the menu were all familiar, but the fillets on display looked nothing like their local namesakes. Except for one: flake.

Dozens of species of shark have fallen under the umbrella term of flake. In this case, it was advertised as local gummy shark.

There is a plethora of conflicting information about whether we should eat shark. Australian fisheries are well managed and considered sustainable on the world stage. Meanwhile, conservation groups say to avoid flake, but local gummy shark fisheries have addressed many of their concerns.

It makes you want to order a hamburger with the lot instead.

In all seriousness, two very important issues stayed with me from this experience: the need to better understand the sustainability of local gummy shark, and the need for clearer labelling of cooked seafood.

Gummy shark caught in southern Australian waters is considered a sustainable choice by the federal government. The biology of the gummy shark is different from familiar apex predators like the great white, tiger and hammerhead sharks. It is relatively fast growing, has a high reproductive rate and feeds on invertebrates in the sand and mud.

The commercial fishery only catches young adults. It employs a net mesh size that allows smaller fish to swim through and larger mature individuals to bounce off. The fishery is controlled under a total allowable catch which is set at biologically conservative levels, currently at 1836 tonnes each year.

The non-target catch of school shark is a sustainability concern. School shark are considered over-fished and cannot be targeted by fishers.

A rebuilding strategy for school shark is in place including measures such as fishing closures in pupping and nursery grounds, gear restrictions and a low by-catch limit. These appear effective in preventing the targeting of school shark. But they also make it extremely difficult to get good evidence of any recovery in the Australian school shark population.

Gummy shark is not a typical shark species and many of the sustainability concerns raised by environmental groups such as the Australian Marine Conservation Society, GoodFishBadFish and Humane Society International are not as relevant to the gummy shark fishery. Aside from the issue of school shark by-catch, which requires careful monitoring, all other signs point to a biologically and ecologically sustainable fishery in our backyards.

So back at the fish shop the local gummy shark sounds like a sustainable option. But can you trust the label?

‘Fake’ flake on the menu

According to the Australian Fish Names Standard, only two species should be sold as flake: the gummy shark and a related species from NZ, rig. So already the waters are muddied, but surely fish labelled local gummy should be a safe bet for sustainability?

The Australian Fish Names Standard is voluntary and country of origin labelling regulations only apply to raw and frozen product- not cooked meals in cafes, restaurants and fish and chip shops. This means your ‘flake’ might not be gummy shark, or from a local fishery.

This undermines the strong branding of Australian seafood as a leader in sustainability and dis-empowers the customer from making decisions based on science, and the environmental standards in the country of origin.

Furthermore, while it is an offence to describe food dishonestly, the reality in the case of flake is that it can be substituted for any other shark species. A Greenpeace investigation using DNA analysis of samples of flake sold in Melbourne fish and chip shops found that a third were actually school shark, probably imported.

In March the Greens and Nick Xenophon, with the support/co-sponsorship of four crossbench Senators, introduced an amendment to the Food Standards Australia New Zealand Act to parliament. This would require the food service sector, including cafes, takeaways and restaurants, to label fish with their country of origin. Similar laws in the Northern Territory have been successful.

Matt Evans’ What’s the Catch program that aired on SBS last year, a campaign by conservation groups, chefs and sections of the Australian commercial fishing industry have drummed up support for better seafood labelling. There is now significant optimism that these laws will pass despite some opposition from seafood importers and the restaurant and catering sector.

Where to from here?

Many of us do our best to purchase our seafood sustainably. However the many seafood sustainability standards and recommendations by conservation groups, third-party accreditors and governments often only serve to confuse.

In truth each of these groups have different definition of “sustainability”. As individuals we could look to align our values with any of the different groups making these making sustainability claims. A promising initiative in this space is the “Common language group”, which recommends some value-neutral information be provided to consumers, including proper seafood labelling.

One thing is certain: Australia is doing better than most of the world on fisheries sustainability. A decision to buy Australian will always carry with it an underlying standard of environmental and social responsibility. It often means our local seafood is more expensive than imports, but then again it is only fair to our fishermen that their product is differentiated in the marketplace.

But we can only make these informed choices if we are provided with accurate information at the fish counter and fish and chip shop and restaurant menus. Mandating the Australian Fish Names Standard and requiring country of labelling laws in the food service sector will be a major step in allowing seafood lovers to better understand where our seafood comes from – and, if they so choose, to get genuine local gummy shark at their local fish and chip shop.