Everybody’s heard of Africa’s “Big Five”…but not everybody identifies the animals that belong in that Big 5 group correctly. Ask around in your office. Most foreigners – even South Africans sometimes – will confidently trot out “rhino, elephant, lion…” and then they get stuck.

Animals like hippo, cheetah, wildebeest, hyena and even giraffe and gorilla (!) are sometimes erroneously thought to belong to the Big 5. That’s because most people presume the Big 5 refers to either the biggest animals in Africa, or the animals that most safari visitors would want to view.

However, the origins of the ‘Big Five’ group comes from big-game hunting. These five animals were considered the most challenging to hunt on foot in the African bush, and it is the high degree of danger involved in hunting each of them, rather than their size or photogenic qualities, that makes them a member of the Big Five group.

ANDREA BEN took the following photos at Sabi Sand in South Africa of the official Big 5. Here’s the list so you never get it wrong again… 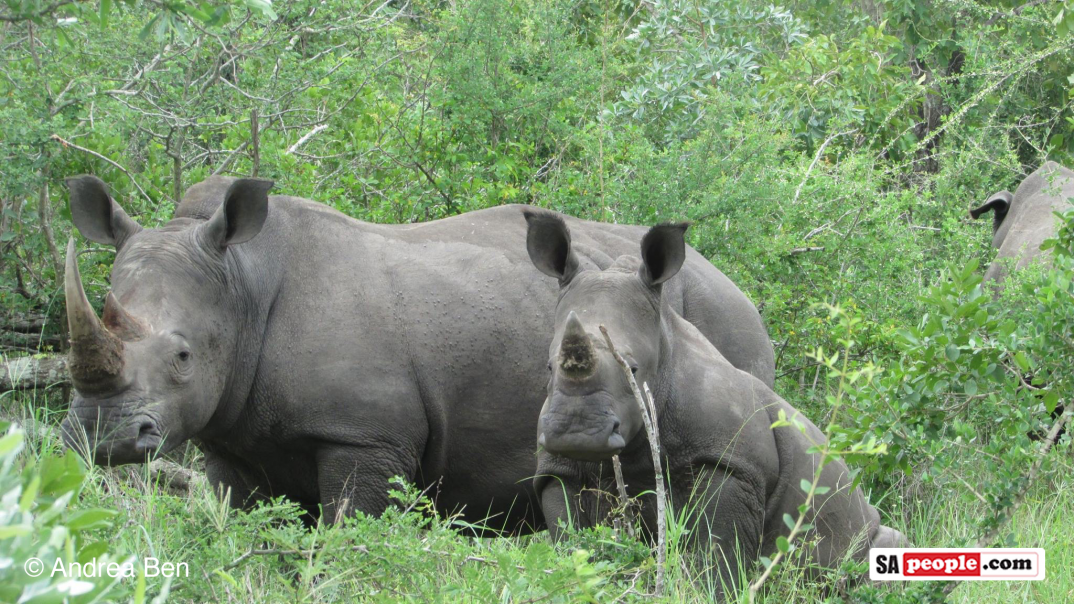 Our beautiful rhino is becoming increasingly difficult to view in the wild…as poaching figures soar. Fuelled by a demand for rhino horn which is viewed in some Asian countries as a delicacy or (erroneously) as a cure for illnesses by those who believe it has magical medicinal value (which it does not. It is as useful to your health as chewing your fingernails.) Poaching of elephants, particular in other parts of Africa outside South Africa, has also increased dramatically in the last few years, fuelled again by a demand from some cultures in the East who want to purchase ivory products as a status symbol. The leopard, which has rosette-type markings (as opposed to the rounder spots of a cheetah), is included in the list because it’s considered the most difficult to hunt thanks to being nocturnal, extremely aggressive and the most secretive of all big cats. (The cheetah on the other hand is excluded from the Big 5 because although it may be super-fast, it’s non-aggressive and not nearly as “smart” as the leopard.) Sadly, within some quarters of South Africa, a practice referred to as “canned lion hunting” has emerged, whereby lions are deliberately “bred for the bullet”. Tourists often unknowingly take part in this industry when they pay to pet cute cubs. These semi-tame lions then become fodder for hunters when they grow up.  Some end up on farms where the enclosures are too small and the animals are even given a tranquiliser to make it easier for this type of hunter.

South Africa’s Minister of Environmental Affairs, Edna Molewa, held a ground-breaking stakeholder meeting today to discuss matters around lion management in the country – particularly to address the mounting public concern about the ‘canned hunting’ of lion.

According to a statement from the Minister’s office today, all the industry representatives at the meeting “conceded that ‘rogue elements’ were operating within the lion breeding and hunting industries, and that these needed to be rooted out.”

A new documentary – “Blood Lions” – exposes the canned lion hunting industry. On top of this, lion bone is becoming increasingly popular in Chinese medicine as an alternative to tiger bone. Although many tourists are more interested in getting a photograph of a cheetah or giraffe than a buffalo, the African or Cape Buffalo is actually considered the “biggest” of the “Big Five” in terms of being the most dangerous to hunt (and – along with the crocodile and hippo – is renowned for being the animal that kills the most people in Africa).