“Thirty-one proud South Africans, their coach and management team will climb aboard a flight to London on Friday to set off on a great adventure with one goal in mind: to bring back the Rugby World Cup for their fellow South Africans.

“They are the pride of our nation – and those are the words of the Minister for Sport and Recreation, Mr Fikile Mbalula, who spoke so passionately and brilliantly in support of the team at their farewell banquet on Tuesday evening.

“Those players will move heaven and earth to make our country proud; they will throw their bodies into those places where the contest is at its fiercest and their chests will be bursting with pride at the honour of representing every single one of their fellow countrymen.

“Not one of those players selected himself and yet there are those who wish them ill, and even to fail, as some form of protest against rugby and what they perceive to be our transformation record.

“Many opinions have been aired over recent weeks and I have listened to them with growing frustration.

“I have been frustrated because the good story we have been telling has been falling on deaf ears; and we do have a good news story to tell.

“Let us get one thing absolutely clear: Our sport is massively transformed from where it was in 1992.

“The idea of an “exclusive”, “white-dominated” game is frankly laughable. What we are is a successful, high performance sport in a competitive global environment; we are a responsible South African corporate citizen and we are a business. We fully realise that to stay relevant and vibrant in our country we need to evolve.

“So, no one needs to lecture us about the importance of transformation – we got there long ago.

“For instance, where were the critics almost three years ago when we became the first sport in SA to hold a national transformation indaba (in November 2012)? We invited the MECs for sport of all nine provinces as well as the sports minister and SASCOC leadership to the occasion as we began to map the way forward. We even set out our intentions in a Transformation Declaration.

“We audited our game and we workshopped and wrangled and we fine-tuned our planning for two years and our General Council of 14 provinces ratified the plan in December 2014.

“Two months later we presented it publicly; published it on our website; printed a 60-page handbook for all our provinces and in May we signed an MOU with SASCOC and the Department of Sports & Recreation to deliver on that plan.

“We did that not because anyone was burning jerseys or taking us to court but because we could clearly see the way forward and knew exactly what needed doing. And it wasn’t just about numbers in the Springbok squad.

“Our Strategic Transformation Plan has six dimensions (demographics, access, social responsibility, performance, corporate governance and capacity building); it has 71 measurable key performance indicators; it has targets for every aspect for every year to 2019 – we have nailed our colours to the mast.

“So in the week that we were first lambasted for being an elite, white sport we opened our 32nd mobile gym for black schools and clubs in Pacaltsdorp; we inaugurated our fifth ‘Boks for Books’ library in an under-privileged school in Stellenbosch and we were named sports federation of the year in awards for women’s sport. Did that rate a mention? Was any of that weighed in the scales of criticism of ‘evil’ SARU?

“All anyone was interested in was the fact that there were eight black players in a squad of 31 when 84% of the under-18 population is black African. It makes no sense does it?

[quote_center]”In our most populace province of KZN, 97% of schoolboys NEVER play rugby.”[/quote_center]

“Well here’s some more statistics for you. In our most populace province of KZN, 97% of schoolboys NEVER play rugby. And the proportion is the same in Limpopo, North West and Mpumalanga – four of our biggest provinces where only 3% of boys have access to rugby at school.

“It’s hardly any better in Gauteng, Free State, the Northern Cape and even the Eastern Cape where around 85% of boys NEVER have access to rugby at school. And if you don’t start at school you will never become a Springbok.

“Only in the Western Cape – where 46% of schools play rugby – can the game really be called a ‘national sport’.

“Only about 10% of schoolboys ever see a rugby ball at primary school and by the time we get to high school that rugby playing population has dwindled to a fraction at the 1st XV level. It is from that tiny subset of potential players that Springboks emerge.

“But we are not down hearted because rugby is very good at identifying talent and we now we can achieve our targets. Our game thirsts for outstanding players and whether one emerges in a township school or from a traditional rugby school you can be sure the system will find him and nurture him.

“And we now have a thoroughly worked out five-year plan on which we can be judged and with which we are aligned with our government. The transformation train has left the station and it is the critics that have been left on the platform. Rugby is definitely on track.

“Let us turn now to that aeroplane and those young men and their management who will do duty against Japan in Brighton on 19 September with the sole intention of bringing joy to this country.

“I would urge all supporters to demonstrate their true feelings towards the team, in the way that the team shows its loyalty to our country – by wearing their Springbok jerseys to the shop, the office, the factory, the mine or on the farm on Friday.

“The team leaves that evening carrying our hopes with them; join me in showing them that they have our unqualified support.” 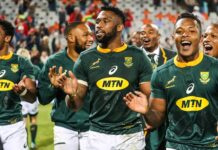 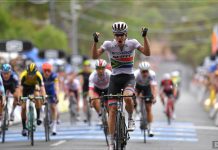 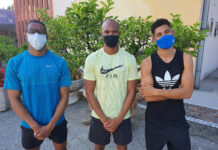