After achieving a consecutive five weeks with no loadshedding (otherwise known as power outages), parts of South Africa were plunged into darkness tonight as loadshedding kicked in again.

Some welcomed the familiarity of loadshedding, re-igniting their relationship with candles…and joking that they had just begun to start experiencing withdrawal symptoms.

Others were confused about which schedules to use since Eskom recently changed schedules, “placing each customer in each time period once every 16 days” to increase “equity for all”.

Then there were those who were upset to be missing a gripping episode of #Umlilo…which was the only hashtag to trend higher in South Africa than #loadshedding.

South African power utility Eskom had warned this morning that there was a “medium” chance of load-shedding this evening.

Earlier this evening they announced in a #PowerAlert that Stage 1 ‪#‎load_shedding‬ was to be implemented from 19:00 to 22:00 “due to loss of generating units”. This was the result…

While the lights were out, the loadshedding jokes were on Twitter:

@Kristelllaaa:
“South Africa has this awesome system. It tells you when you have to go to bed. It’s called #LOADSHEDDING.???? The South African life??”

@grant_09927:
“SA has #loadshedding. Aus has #presidentshedding. 5 presidents in 6 years. Not bad:-)” (Prime Minister Tony Abbott was ousted as leader of the Liberal Party in Australia tonight by Malcolm Turnbull.)

‏@LouYanda_SA:
“#LoadShedding is a like a jealous Ex – when you’re trying to move [forward] they keep coming back in your life.”

@ahmadj1801:
#loadshedding – When the barber cuts the sides of your hair and leaves the middle…”

When you realize that #loadshedding is back pic.twitter.com/zp2f57YZ14

Eskom has called on on all South Africans to use electricity sparingly to reduce the risk of load shedding, and has warned that further power cuts could be experienced during evening peak periods this week. 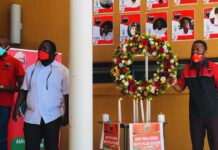