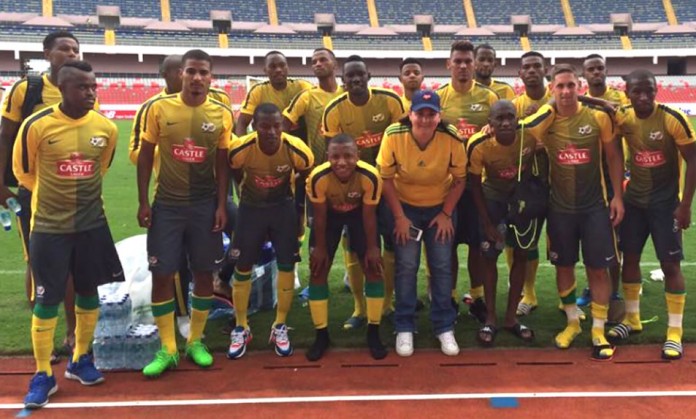 South Africa will have at least one representative in the crowd tonight at the Bafana Bafana match in Costa Rica. She’s South African expat Elizabeth Cubas who’ll be patriotically cheering for her country all the way!

“I have been living in Costa Rica for about eight months and loving it here,” she says. “I do miss home…but I had the most amazing experience yesterday! I got to meet the Bafana Bafana team in Costa Rica!” South Africa beat Costa Rica way back in 2003…in the presence of former President Nelson Mandela, with the same coach as today, Shakes Mashaba. (See below.)

Khune told South African Football Association (SAFA): “I am really looking forward to the match against Costa Rica; in fact the entire team is just raring to go and show that they can mix it up with the best in the world.”

Elizabeth has no doubt it’s going to be an “awesome game” to watch. “It felt like ‘home’ meeting all the guys yesterday!” she says. “We’re countries apart…but we always stick together.

“Go Bafana Bafana. I may be the only one cheering them on tonight…but I know they’re going to do well!”

The match will be played at 04:00 Friday morning South African time.

This was the @BafanaBafana XI the last time they played Costa Rica… Shakes Mashaba was in charge then, too. Won 2-1. pic.twitter.com/SyreniaFzY