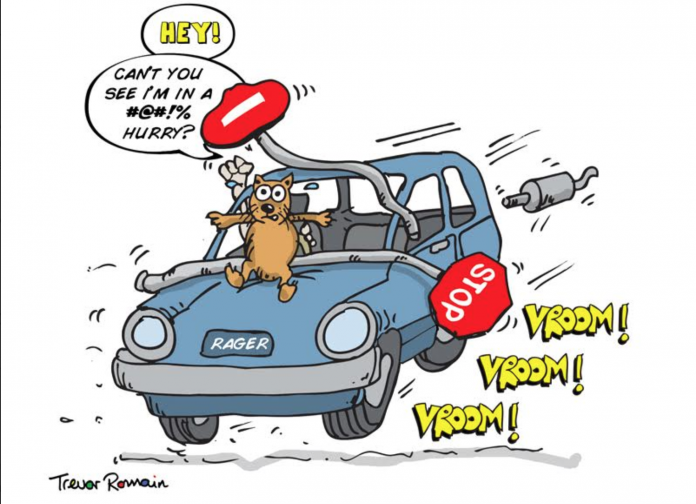 Anyone who has just got back to South Africa will quickly notice several things: the prices (good), the weather (fantastic), the politics (volatile), the protests (increasing). And, of course, then there’s the driving (shocking).

In less than two months back in the country, after moving from New York, I’ve seen drivers…

And this isn’t just on the rare occasion. It’s all the time.

If I had my way, I wouldn’t drive at all. In New York, one can rely on buses and subways, even though public transport does have its own downsides (so, thank goodness for MyCiti and Rea Veya bus services trying to give us an option).

In New York the downsides would be the pushers, shovers, knees-wide seat appropriators, germ spreaders, nail clippers, pizza eaters, and so on, whose behavior has gotten so bad the transit authorities have launched a “be considerate” campaign. But that’s another story.

The times I did drive in America, though, I was pretty amazed at how smoothly things went, even in Manhattan, which is jammed with taxi cabs driven by people from possibly every country (with every driving style) in the world. But not once did I feel like they were driving in a way that threatened their life, as well as everyone else’s around them.

So, where’s the fire?

In South Africa, though, you get the impression lots of drivers just don’t care. It’s all about me, myself, and how much road I can own while I’m getting from A to Z.

Faced with this driving etiquette, my first question was, What’s the hurry? Where is everyone rushing to? What’s so important you can’t be a few minutes late – and get there alive? (Okay, New Yorkers do the same, but on foot, and not behind a ton of steel, so the most danger you face is being knocked over by a woman with a big handbag.)

What makes it even harder to fathom is where I live and drive – Cape Town – a city famous for being so relaxed that people knock off at midday on Friday! So where, I keep wondering, is the fire?

At first I thought maybe it was just Cape Town drivers who were behaving badly, but I’ve seen enough Gauteng, KZN and Mpumalanga license plates breaking the law across the Cape Peninsula to think otherwise.

I can remember a time people used to blame the minibus taxis for abominable road manners, but now it seems like a free-for-all. In fact it’s hard to say who the worst offenders are, although high on the list is anyone driving an eff-you-big SUV, double-cab bakkie or shiny German car. I’ve also counted a surprising number of women, many with children in their cars, speeding, zigzagging, trying to force other cars out of their way (“Buzz off, I HAVE to get to Pick ‘n Pay right NOW!”)

To add insult to injury, you notice – right after they whizz past you – that they often have a learner-driver’s L on their rear window or a “Baby on Board” sticker.

I’ve come to think of this behaviour as “road privilege”, which is a bit like white privilege except it’s an equal-opportunity affliction. Offenders come from every race, sex and age group, and the country’s roads are theirs to do with what they want.

I keep wondering where the traffic officers are – but that too is another story. In the meantime, though, as these drivers get away with road privilege, the trickle-down effect is probably taking place. One driver sees another getting away with driving badly, so he/she starts doing it too. If you can’t beat ’em, as they say, join ’em.

And after they get out of their cars, how long will it be before road privilege insinuates itself into other parts of their lives too? Break one rule here, break another one there. Everyone might up in arms about corruption in the government, yet it’s okay to do it in your daily life.

What’s the solution? Well, being courteous on the road is a start.

Maybe road hogs should be named and shamed, the same way people took pictures of drivers littering and tossing cigarette butts out their windows a while back. But it’s pretty hard to take down the license plate of someone speeding, zigzagging, overtaking on a white line without doing it yourself. And then, of course, how do you find out who they are?

A friend of mine saw a car with a company logo  practicing some pretty egregious road privilege, and later phoned the company. She felt embarrassed doing it, but they were actually grateful. “Thank you for calling us. We wouldn’t have known otherwise.”

And maybe that’s all it takes – to remind people that privilege, no matter what kind, is something South Africa can really do without.