Just before the last full moon of 2015, I was out in the early evening walking down a dry river bed in a densely populated rhino area with three field rangers and a dog. Armed to the teeth, the K-9 unit walked quietly either side of me. Sure I felt safe, but I was nervous. This is one of the largest wilderness areas in the world where gangs of poachers are present every hour of the day, every day of the week, every week of the year. I’ve been doing this for some time now… and there is no other way to look at this “rhino poaching crisis” than as a war.

During the course of 2015 I’ve found myself in these same situations with men and women carrying rifles and pistols in conflict zones all over South Africa. I have watched vets do trauma surgery on many, many victims. I’ve patrolled farm fence lines with private citizens by moonlight… waiting for the inevitable breach to happen.

Once these suspected poachers are arrested and in the system, I’ve also watched our state prosecutors duel well-funded defence attorneys in long-drawn out bail hearings and court postponements.

Thousands of miles across the ocean I’ve even met with rhino horn users in their living rooms and gone underground in the back streets of Asia’s cities to see the end product that funds so much misery and terror.

Sounds and very definitely feels like a war to me.

When I think back to the Iraqi war a decade ago, it was a groundbreaking era in media gathering as news coverage took on a new form and was given the term ‘embedded journalism’.

War reporters were given unprecedented access to the battle frontline because information gathering has changed. We now live in a world driven by desire for never ending information.

So the dispatches from World War II and filmed newsreels shown several weeks or even 24-hours later just aren’t relevant in an age of live television fuelled by social media run by “citizen journalists” – those with front row seats to the latest news events, armed with internet connected camera phones.

In making stories for 50|50 as well as filming my upcoming documentary ‘STROOP’, I’m embedded in our rhino war, becoming witness not only to awful atrocities but also to those people who are fighting it.

Each of these war duties is important, but it is critical that they all come together.

It always amazes me that these simple, gentle creatures are caught in such a web of complication. The world of rhino poaching is so multilayered, so complex and despite all my time in it, as a filmmaker it’s a struggle figuring out how to unravel all of this for the South African public.

2016 has to be the year complication stops and we work simply and more effectively for our rhinos. This is a year of major landmark court cases which I hope will close with appropriate sentences.

This is also the year in which nations from all over the world will meet here in September to discuss our rhinos.

Under the United Nations, the Convention on International Trade in Endangered Species, more commonly known as CITES is meeting for the 17th time so it will be known as COP17.

Typical of intergovernmental labels, most of us get caught up in only a few of the words… in this case “Endangered Species” and we don’t focus on the one in the middle, “Trade”. This agreement is a trading agreement between nations of the world, determining which parts from wild animals and plants can or cannot be traded.

In 2008, just under a million trade deals were done…. so it’s a big revenue maker for governments around the world. Many who own rhinos or are custodians of our rhinos want to trade in rhino horn feeling that a sustainable commodity will save our rhinos.

And many who own rhinos or are custodians of our rhinos feel that trade will increase poaching so much so, that it will cause their extinction in the wild. So it’s a contentious issue and it is presumed that trade in rhino horn will be hotly debated in Johannesburg later this year.

Our Department of Environmental Affairs has been preparing for the COP by compiling a 22- person team to look at the possibility of trade and they have been meeting behind closed doors for most of 2015.

Their report was expected months ago and rumour has it that they are still arguing about the best way forward. Expect lots of debate when the report is finally released.

While the court cases and CITES event are set in stone for this year, other issues are as predictable as ever.

Private rhino owners will have to make the tough decision on whether to auction off their increasingly expensive commodities or pay more for security. Wildlife organisations will continue to struggle to raise funding due to rhino fatigue.

Vets will still get the dawn calls to race out to survivors, and our rangers all across our land will lace up their boots and walk out again into the unknown, today, tomorrow and each day into 2016.

But we must not despair, the war is continuing yes, but now more than ever, we have the ability to change the course of events.

We really do. The power of social media has shown us that.

Every time a South African retweets, shares or likes a post they add their voice to the war.

I cannot emphasise enough how important the weight of normal ordinary citizens are to a media issue. With constant engagement on Twitter, Facebook and Instagram, I feel the power of my responsibility on the front lines.

2015 was the year of #FeesMustFall and #Cecil. Those two social media issues changed laws and scared politicians into giving in to the demands of citizens.

So who knows what powerful events 2016 may hold for our rhinos.

BONNE DE BOD is an award-winning wildlife television presenter and filmmaker who is passionate about all things rhino. She is currently filming a documentary with award-winning filmmaker Susan Scott on the rhino poaching crisis called ‘STROOP’. Due for release in 2016, the groundbreaking film is expected to unravel the complex intricacies of the rhino issue to audiences in South Africa and around the world. 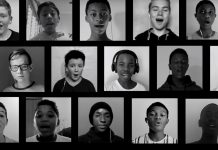