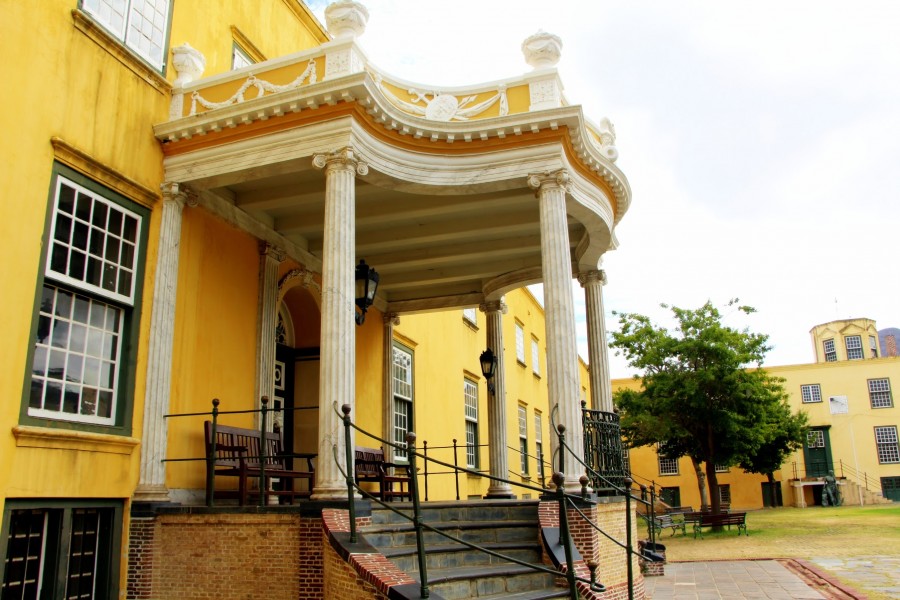 In 1666 the Dutch East India Company began the construction of the Castle of Good Hope. Now, 350 years later, the star-shaped stone fort is becoming as much an image of colonial rule as an edifice promoting inclusion and reconciliation.

On 2 January, the Kaapse Klopse parade for the Tweede Nuwe Jaar coincided with the birthday ceremony at the Castle, with the colourful annual parade that was started by slaves centuries ago starting at the very home of their erstwhile masters.

In speeches on the day, the message was one of coming together, of freeing the ghosts of slaves and tortured prisoners of the colonialist rule and opening the Castle to becoming a place of healing, reconciliation and inclusion.

Below is a view of the castle as seen from the corner of Buitenkant and Newmarket Streets. The moat surrounding the castle was only completed in 1720, 41 years after the completion of the castle itself. The entrance of the castle is powerful and menacing, with a giant gate decorated with thick spikes and high stone walls. A tiny door in the gate provides a quiet entrance into the castle, although you have to duck. The bell tower on top of the entrance was used to warn citizens of danger and could be heard 10 kilometres away. The castle is split into two main blocks. The outer one housed the main guardroom, clothing stalls and barracks, while the inner one was more protected as a second wall barred the entrance from unwanted guests. This block contained most of the shops, the torture chamber, prison cells, as well as the Dolphin Pool where Lady Anne Barnard, the first lady of the colony, was said to have bathed nude. The Governor’s Quarters at the Castle – which is reportedly undergoing a much-needed restoration of about R108 million – face the main entrance and house the Grand Hall as well as the De Kat Balcony, from where most announcements were made. Inside the Castle there are numerous collections, the most notable that of William Fehr, a businessman from Burgersdorp born in 1892, which includes furniture, porcelain and art from colonial days.

Contained in the Fehr collection is a wealth of historical information concerning the peoples and landscapes of early colonial South Africa. It is said to be one of the most important public collections of artefacts of the period.

From the Castle wall you can get a view of the surroundings. The bright yellow walls – a colour chosen to apparently battle the harsh African sun – contrast heavily with the modern greys of today’s city centre. Grass growing from the walls of the castle reminds you of how long the building has been in existence. But the length of time seems a lot briefer when you think that the view of Table Mountain today is the very same one the original builders of the Castle had.

Fore more details on the Castle and the William Fehr and other collections there Iziko or Cape Town Tourism.

Catherine Franklin is an Honours graduate from UCT, and is currently working her way towards her dream job of being a journalist. Much of her writing has been published on her blog catchingcapetown.