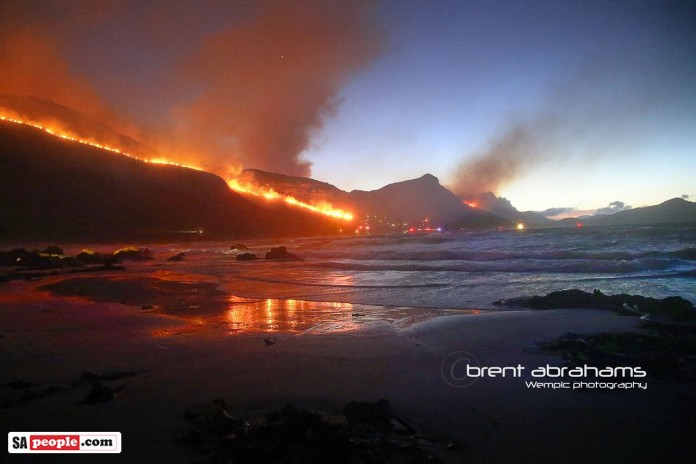 Fire has been raging on the mountain in Cape Town, South Africa, again and the road between Kommetjie and Misty Cliffs has been temporarily closed as firefighters on the ground and in helicopters work together to put out the flames. Table Mountain National Park (TMNP) has asked those in the area to rather use the route via Simon’s Town to access Cape Point.

Photographer Brent Abrahams captured the above photo in the early hours of this morning and said “unfortunately, the mountain is burning again. Residents in Misty Cliffs were asked to evacuate at about 2 am this morning.”

As temperatures in Cape Town continue to soar to over 30 degrees, Volunteer Wildfire Services (VWS) said it had been “another busy weekend for fire crews across the City, Boland and Overberg regions this weekend, with VWS crews being called in to assist TMNP, Cape Nature and Overberg District Municipality” including a blaze on Signal Hill on Saturday night followed by another on Devil’s Peak that went into Sunday morning.

The hot, dry and windy conditions (with some gale force winds) – which, according to VWS, are “conducive to ignition and spread of wildfires” – are forecast across much of the Western Cape, Northern Cape and central parts of the country for this afternoon. It has been alleged that at least one of the fires was started by arson.

VWS – which is made up of 100 percent volunteers – said crew members from all of their stations were operational this weekend. At 8am this morning, VWS reported additional crews from their ‪#‎Newlands‬ and ‪#‎Jonkershoek‬ branches had been called in to assist VWS, Cape Town City Fire, TMNP, Working on Fire and contractor crews that had been battling the blaze in Scarborough since the early hours of this morning.

One firefighter wrote on Facebook last night, just after midnight: “What a shift, and still another nine hours to go…”

According to Cape Town City Fire’s Theo Layne approximately 200 firefighters and 25 vehicles were on the scene, as well as aerial support.

VWS uploaded the video below of the #Redhill wildfire at midday today, showing the extensive size of the task at hand as air crews and ground crews engage in team work with the choppers knocking down the flames from above while the firemen on the ground work to extinguish them.

Meanwhile, on the Blouberg side of the mountain, the winds have created perfect conditions for kitesurfers…

Thank you to all the firefighters and the community for your fantastic effort!