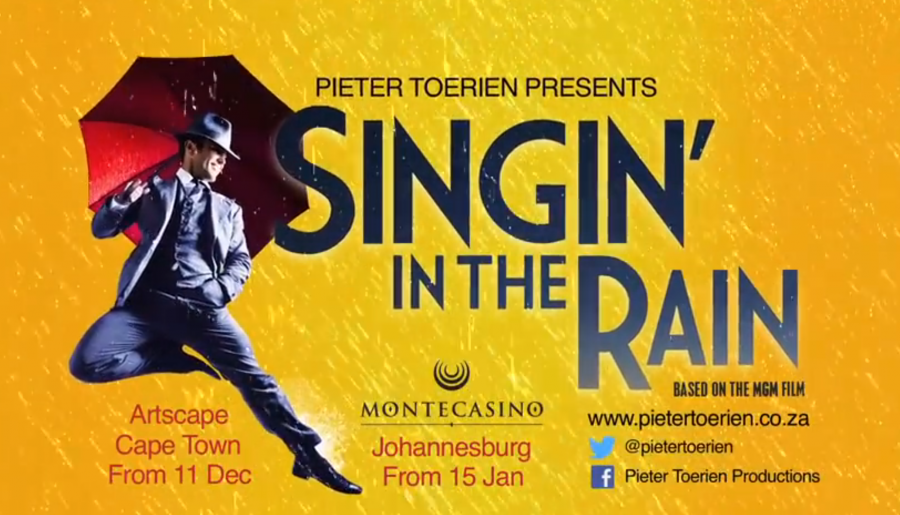 For anyone who hasn’t seen a South African theatre production recently, “Singin’ in the Rain” will astound you. The famous musical – which is actually seeing a revival on Broadway this year – gets nothing but praise, praise and more praise.

After a wildly successful run in Cape Town – with audiences in the first three rows getting ponchos for the famous “Singin’ in the Rain” scene – it has just opened in Johannesburg. After reading Robyn Sassen’s review below, you clearly have no choice but to see this brilliant South African version of the beloved musical!

A great behind-the-scenes video showing the “triple threat” leads of the show, who sing, dance and act brilliantly, and how the show was put together.

Quite often, in the arts, you find yourself experiencing something that trails a long history of film and stage musicals, of iconic dance moves and schmaltzy narrative that has irrevocably slipped into cliché. Mostly, this kind of candy floss cuteness that is passed down from generation to generation gets tired not only in its message but in its delivery. Occasionally it gets spoofed. But very seldom, are you privileged enough to see something in this traditional line that has been so flawlessly and meticulously translated onto the stage with so much love that you can weep at its impeccable beauty and authenticity, as you are swept away on the lyrical romance that it promises – regardless of who you are. This is what you can anticipate in Singin’ in the Rain, currently onstage at Teatro.

We’re in New York. It’s 1927. The world is in a state of emotional and creative high – it’s just weathered a world war and feels on the cusp of another. There’s a frenetic sense of aggressive positivity and possibility in the air. And culture, by way of film, is shifting and shaking its own identity into terrain unmarked by the technology of the time: the talkie is going through its birth pangs.

Of course, Singin’ in the Rain was a 1952 Metro-Goldwyn-Mayer film about films that made the leads, Gene Kelly and Debbie Reynolds – in the respective roles of silent movie star, Don Lockwood and chorus girl Kathy Selden – seriously famous, effectively putting them on a par with the Mona Lisa and Van Gogh’s ear in terms of universal cultural recognition – but more than the performance of Kelly and Reynolds, it’s the choreography and the music and how they fit together that are quintessentially so happy that they’re unforgettable.

So, here we have a stage version of this enormous musical with a giant reputation and a whole bunch of theatre challenges – from a star who has to sing and talk squeakily and obnoxiously out of sync and out of tune (Lina Lamont, played by Taryn-Lee Hudson) to the imperative of really making it rain on stage. And they’ve done it. They’ve really done it.

Every little nuance, every little 1920s sashay and fringe, and every big gesture of love and hate, of spite and malice and new ideas is as frisky and fresh – and genuinely funny – as it was onscreen in 1952. This is a flawless show, which unapologetically presents values that may be considered politically inappropriate in our contemporary world, but it’s a show, headlined by Grant Almirall and Bethany Dickson as Don Lockwood and Kathy Selden respectively, that will leave you with a dance in your head and a sense of hope in your heart.

Featuring a cast of both seasoned and young performers, it’s a show that fits together like clockwork and runs seamlessly, but never feels staid or formulaic. It seems a very early comment to make in the year, but it’s sincere: if you treat yourself to one big musical this year, make it this one.

Robyn Sassen is a freelance arts writer, based in Johannesburg. She is the former Arts Editor of the SA Jewish Report and enjoys a specialty in writing critically about visual art, theatre, contemporary dance and books. This article was first published on Robyn’s blog My View The Arts at Large, and can be viewed here.