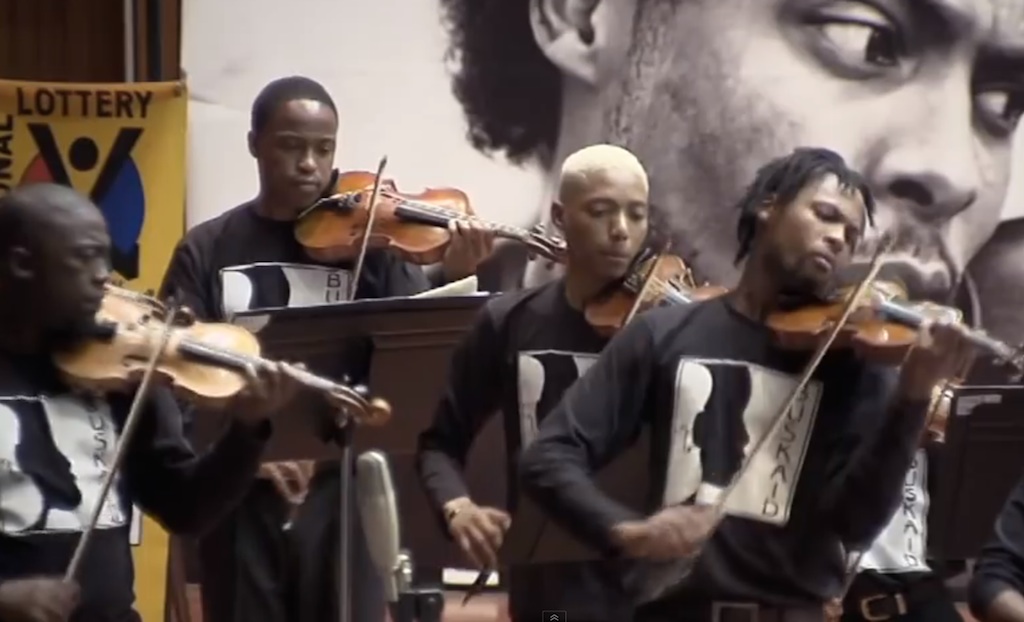 “It’s hell to try and get a concert ready in such a short period of time, but it’s important that we are a part of the Johannesburg International Mozart Festival,” says Rosemary Nalden, the founder and conductor of Buskaid Soweto String Ensemble, arguably South Africa’s most important musical incubator which, based in Diepkloof, Soweto, trains youngsters to perform beautiful music.

Taking a break from rehearsal in the Reformed Presbyterian Church on Mphatlalatsane Street, Nalden, a graduate of London’s Royal College of Music and the University of New Zealand, who enjoys a passion for early instruments and recorded as a violist with conductors of the ilk of Sir Roger Norrington and Sir Simon Rattle, during the 1980s, spoke to My View. The work on the table was one of Bach’s Brandenburg concerti. The focus: timing. The atmosphere: intense. The contrast of Soweto with the exuberance of Bach under the fierce concentration of 10 performers: tears-inducing.

“Selecting them was a bit of a headache,” Nalden speaks of the performers you will see on Saturday (6 February). “Our viola section is at the moment not very strong. The thing is, sections come and go, in rather a random way. We have waves of people with preferences for different instruments … a few years ago, actually a lot of years ago, we suddenly lost our ‘cello section and we had to build it up again.

Watch the performance from February 2015 where Melvyn Tan performs Mozart’s piano concerto no 12 in A major K414 in Mozart’s own arrangement for string ensemble, with the Buskaid Soweto String Ensemble, directed by Rosemary Nalden.

“Those viola players you saw in the rehearsal are actually fiddle players. Khotso Langa is our first viola player. He’s a very talented fiddle player – he’s a very talented boy altogether – and he kept sort of coming to the rehearsals and he’d learnt the music, but he didn’t have a part to play. And then our principal viola left a rehearsal early for some reason a couple of weeks ago and Khotso was hanging around, so I went and found him a viola, and he’d really never played a viola before, you know, it’s a different clef. And I said, ‘Oh come on, Khotso, just do it.’

“He’s really good and he’s got the job. He’s keen and he’s at that sort of adolescent stage – he’s 16 – that he just wants to pretend it doesn’t really matter, that he’s very cool about everything, but you know, he feels intensely he wants this.

“When a child comes to Buskaid for the first time, you really don’t know what potential they have. Most of the time you can sort of tell with some of them it’s going to be a real trial.” Armed with a passion for performance practice and teaching, Nalden uses the teaching technique pioneered by Paul Rolland and developed by Sheila Nelson.

She speaks about a 12-year-old who came to the space just before last Christmas. “He’s become my personal project. And it’s been just mind-boggling. He came into this space out of curiosity. He came and sat and watched regularly. Until I asked him if he wanted to learn.”

A light comes into her eyes. “The other day, he was holding the bow, and I said to him, it looks so good. Does it feel as if you’ve done this before? And he said ‘yes’. That’s sort of a funny little trick: for some of them it feels as if it’s familiar because they do it so well and so easily.”

As a mentor for black adolescents since starting Buskaid in 1997, Nalden, who was awarded an MBE in 2002 and is one of five musicians worldwide to have been awarded honorary membership of the Royal Philharmonic Society, has probably experienced all the emotional trials she could’ve imagined, some of which still surprise her. At the mention of the idea of agony, she eloquently covers her face. “But when they get together and the music just flows in the way you just heard, it’s worth everything.”

This year’s Buskaid concert for the Johannesburg International Music Festival features not only work by Johan Sebastian Bach and Philippe Rameau and a selection of kwela music, as is Buskaid’s tradition, but also Kol Nidrei, a piece of music composed by Max Bruch, which is unequivocally the most important – and most recognisable tune in Jewish culture.

The members of Buskaid play the Suite from Rameau’s Castor and Pollux:

It’s a curious tale that brought it to this repertoire. Nalden’s personal family history rests on Jewish connections, but this is not why we will be hearing Kol Nidrei, the opening song for the confessional festival of Yom Kippur, the most significant of all Jewish observances, in Saturday’s concert.

“Tiisetso Mashishi, the violist and Gilbert Tsoke, the ‘cellist simply fell in love with it,” Nalden explains. “Tiisetso came to me and said he wanted to do a viola arrangement of it. Gilbert heard this and said, ‘Hang on. You can’t do this. This is a ‘cello piece. I want to do it.’

“So there was this conflict going on. We auditioned both of them; they will share it. And that’s not all, Kabelo Monnathebe then asked me where he can find it arranged for violin. They adore it.”

It’s a bit like musical history repeating itself. Nalden muses: “Bruch was not Jewish and he really didn’t write this work for religious reasons. He just took this melody – or rather, all of these melodies, there are a few of them – and just used them, because he loved them.”

Jewish music is not foreign to Buskaid. “Some years ago, we did a Jewish suite of songs. We were playing works by Ernest Bloch. I took five of them to a Friday night service at the synagogue in Glenhove Road, in Oaklands. I’m hoping we’ll get a bit of a Jewish audience, for this concert.”

Grahamstown and Singapore are on Buskaid’s wishlist for 2016, the latter to play with pianist extraordinaire Melvyn Tan, a friend of the project who played with them at last year’s Mozart Festival.

“I raise the money for all of these trips by mainly going to corporate sponsors, but on the whole we enjoy really scant support from the government. It’s so silly. These are ambassadors”, she gesticulates towards the performers. “There’s a perception about young black men in the international world, which could be refuted, and these youngsters have the capacity.”

Nalden continues making dreams come true. “I’ve no idea how many local graduates, we’ve had, but we’ve sent seven to the Royal College of Music, three of whom have graduated; others have gone into other professional directions.”

Referring to the recent scourge of racist accusations in South Africa, she recalls: “When we used to scrape away in the foyer of the Linder Auditorium many years ago, we used to get these elderly (white) ducks, who were coming to hear Richard Cock conducting Johannesburg Philharmonic Orchestra; they used to say things like ‘what are these people playing this kind of (European) music for?’ It used to make me terribly cross. These kids are far more talented and sensitive to the nuances in the music than the kids I taught in Hampstead. This kind of racism is nonsense. It’s rubbish.”

Robyn Sassen is a freelance arts writer, based in Johannesburg. She is the former Arts Editor of the SA Jewish Report and enjoys a specialty in writing critically about visual art, theatre, contemporary dance and books. This article was first published on Robyn’s blog My View The Arts at Large, and can be viewed here. Read more about Buskaid.