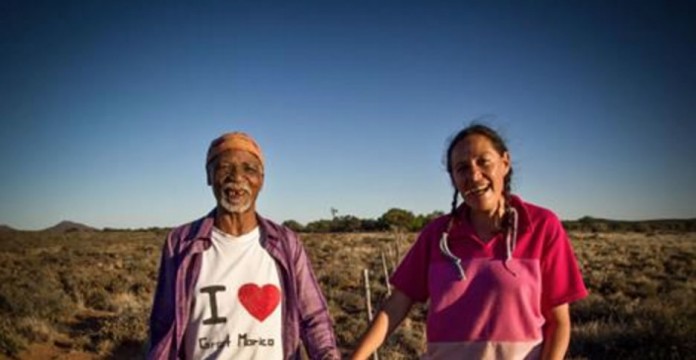 There is no obvious way to sneak up on herbalist Antoinette Pienaar and Karoo healer Oom Johannes Willemse. As documented in her well-loved book The Griqua’s Apprentice (translated from Kruitjie Roer My), they live on Theefontein Farm near Beaufort West, which can only be found via an intricate set of directions involving small dirt roads with middelmannetjies and a few cattle grids.

You know you’re close when you see a small group of white buildings resting in the lap of two converging mountains.

But first there is a long approach via a rising road. At the top of it, you are greeted with ferocious barking from a bewildering number of greyhounds and Italian whippets in large enclosures.

The largest is Danster. He looks as if he could murder any strangers entering the werf. Antoinette, dressed in a pink dress and slip-slops with her hair in two plaits like a schoolgirl, sings out “Danster stil. Ja ons hoor jou. Ja.” (“Danster, quiet. Yes we hear you. Yes.”)

Then she welcomes us and shows us where we will sleep tonight. It is a typical Karoo labourer’s cottage, just like the others. No one stays in the grand old farmhouse. Only ghosts live there, she tells us.

Our cottage has two rooms, divided by a central one which has a huge hearth. On the wall of our little bedroom – with two venerable hospital beds – someone has painted two angels blessing two people. One of the curtains is a Montego dogfood bag.

Oom Johannes’ healing powers are well known in the area. Shortly after we’d pulled up, a family arrived from Rietbron for a consultation and he disappeared into his cottage, the one with the blooming pelargoniums in front.

While Oom Johannes is busy, we visit Antoinette in her little house, navigating through solar panels and batteries under her afdak.

The first thing you see as you enter is the view through the unadorned window, which gazes all the way across the vast Karoo to the distant Swartberg.

To the left, a blackboard on which is clearly written in white chalk: “Ons is hier om te leer liefhe.” We are here so that we can learn to love.

To the left and right of it are images of Jesus.

The hearth glows orange with burning embers in it, a blackened pot on a tripod simmering above it. On one wall is a huge sketch of Egbert van Baart of Groot Marico on it, and surrounding that are dozens of pictures of beloved dogs.

A candelabra hangs at head height beside her well padded chair next to the fire. There is also a small table with knitting on it and a leaking castor oil bottle that she uses to dab on a wound inflicted by a thorn tree. Also a tin full of pencils. She favours green 6B pencils, sharpened with a knife. She wrote her book by hand in pencil, sitting right here next to the fire.

There is a container with Tibetan incense on the table, along with a computer hard drive. On the side is a CD tape deck. Later on she plays some soulful Russian music that someone sent her. Solar power is a wondrous thing.

Tikkie Tong-Tong the parrot walks around, sometimes sitting atop his cage and sometimes inside it. It is his murmurings one sometimes hears during her Friday broadcasts of Kruie Kraai Koning on Radio Sonder Grense (RSG).

He believes Karoo herbs have an answer for depression…

When we go and sit outside, Tikkie is audibly upset to be deprived of the company. Antoinette speaks softly to him and comforts him.

He responds in a resigned tone. “Toemaar”, he says. “Never mind”.

Oom Johannes and Antoinette often have people seeking healing that come and stay for weeks at a time. While we are there, we meet one of them.

Paulus van der Merwe returns often from Hamburg in Germany, where he plays oboe in the Philharmonic Orchestra. By taking the strengthening herbs Oom Johannes prescribed, Paulus says he managed to postpone a heart-valve transplant until the technology had improved.

As they go about their afternoon chores on the werf, Oom Johannes and Antoinette chat to one another about the chickens as if about a daily soap opera. They comment on which one is attracting the attentions of the resident rooster, poor thing, because her chicks are still small and she’s not emotionally ready. And that one who is so reckless and heedless with her chickens. And this one that doesn’t take them to drink water often enough.

Dominating the current poultry action is the relationship between the preening turkey cock that is lording it above the compliant two turkey hens, both of whom are obediently laying eggs. He, meanwhile, positively thrums with energy, snapping his feathers to attention and flourishing his tail like an ugly peacock.

In the last light we all go for a walk with Danster and his tribe. Antoinette intones their names like a spell, like a thread over them all. They preen, sniff about, pee and smile. All except Danster, who holds his pose as lord of the pack.

Night comes. The birds recede and the first bats flit over the aloes.

By candlelight Antoinette serves up the most deliciously tender roast lamb, with gemsquash, rice and potato.

Paulus, Oom Johannes, Antoinette, Chris and I crowd into her tiny living room before the fire. After eating, everyone thanked everyone else because, as Oom Johannes explains, you eat better and enjoy a meal more when you are with other people.

That night, before the fire, is a night of storytelling.

Oom Johannes tells us how he’d dreamt of meeting ‘juffrou Antoinette’. He had inherited the second sight from his grandfather Oom Hansie and he had long foreseen that one day a woman would arrive, ready to learn the art of healing with Karoo herbs from him. And when she finally pulled up on the farm in her red bakkie called Dapper, pathetically weak from cerebral malaria, he exclaimed: “So you have arrived here at last, juffrou. And you still look so bruised.”

Oom Johannes also tells us how he’d been ‘called’ for healing. It was a dramatic thing that happened when he was about 12. His sister had fallen sick, had been given medicine, and had died shortly thereafter. Now his mother was sick, unable to move. They were being told that she wouldn’t last.

The doctor had brought medicines. But young Johannes distrusted them. He had been praying for a remedy and it had come to him in a kind of vision.

Instead of giving the doctor’s medicine to her, he gave his mother the tea made from steenbokbossie. “And immediately she stood up. My mother responded immediately.”

Then he knew he had healing powers. The power of nature flowed through him.

His parents were itinerant pieceworkers, and he was born at Breekkierie Farm near Kenhardt. Oom Johannes never went to school. He grew up learning about the veld, and how to work on a farm. He herded sheep in the days when there were few fences and any ploughing was with the help of oxen or donkeys.

He spanned fences, he trained horses, he built kraals and cribs, he learnt how to fix windpumps and put a Lister machine back together again.

He also remembers the time before dagga was banned.

It’s uncertain how old Oom Johannes is. He could be anywhere between 75 and 95, according to his various documents. He remembers when Pampoenpoort was a major crossroads in the Karoo, and when he saw his first car – an experience that caused him to dive into a ditch, terrified.

He also remembers the time before dagga was banned.

Dagga had long been a horse-breeder’s secret. The horses loved it, and the essential oils in it gave them spirit and a bright shine to their coats. The police fed their horses dagga too.

When dagga was banned in the 1940s, the horses took it hard.

“If you had a zol in your pocket and walked past a horse, it would chase after you.” The horses bust far more marijuana smokers than the police, laughs Oom Johannes.

He’s more serious when he talks about how some people think horses and donkeys feel no pain.

Antoinette tells us that if Oom passes a donkey cart and the owner is whipping the donkeys, he stops, halts the donkeys and gets the whip from the driver, all the while offering to show him how to make them go faster.

Stay on the driver’s seat, I’m going to the back, he’ll say. Then he lashes the driver between the shoulder blades, so he knows how much it hurts.

He foretells that fracking will attract disaster…

Talk moves on to fracking, as it inevitably does these days in the Karoo.

All I can make of my notes of that particular sequence of conversation was apocalyptic snippets: “all gone, then just fire”, “the time of judgment is here”, “clouds will sink” and “die Waterslang sal die nie toelaat nie”. (“The Watersnake will not allow it.”)

Later he says “If the water is poisoned, we will all die. We must pray.”

He foretells that fracking will attract disaster, in the same way as the flash floods of 2011 came a few weeks after fracking had first been publicised in January 2011.

That night the stars are a vivid canopy over us, and Beaufort West’s lights glow on the horizon.

The wind blows like a mad thing, and the Aermotor windpump spins all night, clanking and drawing up water, mercifully refilling the dam.

In the morning, the soap opera chickens cannot believe their luck. They get the leftover rice from the night before. Antoinette prepares us all a breakfast of eggs harvested from the werf, fried and delicious, with roosterkoek just off the fire.The wind blows like a mad thing, and the Aermotor windpump spins all night, clanking and drawing up water, mercifully refilling the dam.

Paulus bring in a strange stringed instrument that stands foursquare on the floor – it is a monochord, and offers a sweetly plaintive sound.

Antoinette tries it out, and there on the spot sings out a chant: bless Theefontein, bless Chris, bless Julie, bless Oom Johannes, bless Paulus, bless us all.

Thus blessed, we take our leave, hugged by everyone. The dogs bark a farewell.

Antoinette and Oom Johannes regularly head to Beaufort West’s post office to send off little fragrant parcels of healing Karoo plants. You can get hold of Oom Johannes on 078 196 6711 or Antoinette on 083 273 9659 or email pienaarantoinette@gmail.com. The recently-published book is the perfect gift for someone with any link to the Karoo. 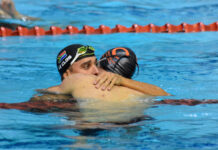 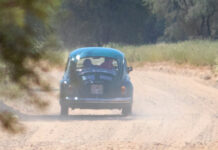