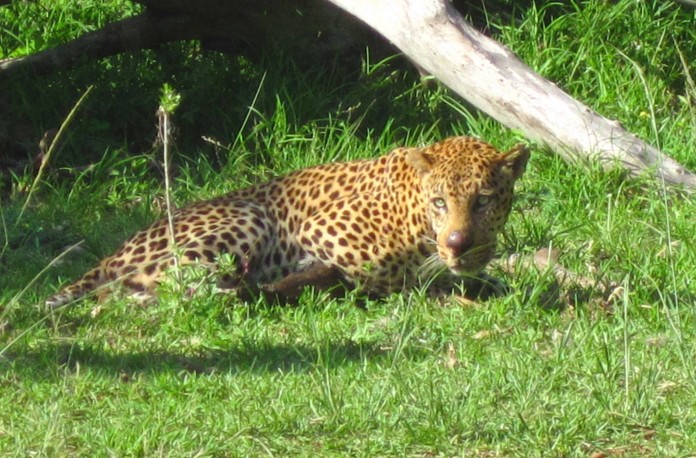 It’s been quite a week for campers in the iSimangaliso Wetland Park. On Tuesday morning I received a call that a man had been bitten by a hyaena, while he was asleep in his tent at Cape Vidal. Luckily it wasn’t life-threatening but nevertheless a hyaena with a penchant for biting people isn’t really what one wants in a campsite.

A trap was set, rangers waited, but with no success the first night. The next night, the trap was set off – but instead of a spotted hyaena inside, it was a great big leopard who was none too happy to be trapped in a cage.

And so I was called in the wee hours of the day to please come and dart it – easier said than done with the tight metal grid too small to get a dartgun barrel through it. Which meant placing the gun right up against the cage while an enraged beast was doing its best to get to me. Anyway, I managed, and we moved the animal some distance away and released him (albeit with a bloody red nose for his fighting efforts, as you can see in the pics on this page).

The campers waking up to the furore must have wondered if they were living in a Nat Geo episode!

Mind you, leopards have been living amongst men forever, and certainly in that camp area for decades without any reports of attacks.

The real problem of course is that visitors feed animals or leave food accessible to scavengers which results in overly habituated animals and the ensuing negative encounters. And often, they are really signing the animal’s death warrant because ultimately they may have to be destroyed when things turn ugly.

But if Cape Vidal sounds wild, consider the experience of one Matthew Peters who stayed in the tented Safari Camp at uMkhuze the other day. He set up a camera trap to photograph anything that moved past his tent during the night. Imagine his surprise at seeing a huge male lion on the playback screen the next morning!

And to end the week off, on Saturday morning we flew to uMkhuze to do some work. As we approached the landing zone, three cheetah rushed out of the bush across the road, chasing impala.

Minutes later they ran back in the opposite direction – but this time THEY were being chased. By baboons! Straight through Mantuma Camp… I would have loved to have seen the faces of visitors sipping their morning coffee when that took place.

Moral of the story – camping in Africa isn’t for the faint-hearted.

And please DON’T leave food out for the camp site animals.

P.S. In case the question is asked ‘is camping in a game reserve safe?’, I’d rather sleep in the bush than Johannesburg any day – it’s about a million times safer! It’s an absolute privilege to be able to do so. And just think how many people go to Mana Pools and other wild unfenced places just to get back to nature… But if it’s too scary, maybe go to an Aventura holiday resort where the only risk is the pee in the pool ?