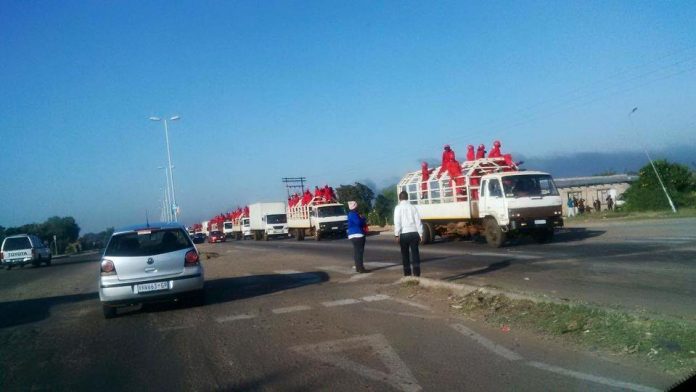 While President Jacob Zuma urged all South Africans to pray for “peace, unity and tolerance” in South Africa yesterday, those words appear to have fallen on deaf ears in Hammanskraal where at least two people, possibly more, are reported to have been fatally wounded today in shocking protests.

As horrific photos of burning buses and bodies were spread on social media, the Executive Mayor of Tshwane, Cllr Kgosientso Ramokgopa said he had received the news of the violent protest that erupted with “a heavy heart”.

According to unconfirmed early reports at least two Red Ant employees – contracted by the City of Tshwane to carry out evictions and demolitions of illegal shacks, were killed and six injured.  CICA-South Africa said there were unconfirmed reports of more fatalities, and also reported three buses were burnt and stripped for scrap metal.

POWER987 News reported that Metro Police claim “the community started throwing petrol bombs and stones – after which police stopped breaking down the shacks.”

South Africans were shocked by today’s events with #TurnBackCrime ambassador Yusuf Abramjee pleading with the Tshwane mayor to take urgent action, and tweeting: “I have just seen a video of a man set on fire in #Hammanskraal – Scores of spectators and no help as the man burns to death. Sad!!!!”

Justice Project SA ‏said: “Wherever the #RedAnts go, misery is sure to follow. This isn’t “sad”, it’s a travesty!”

Several people took to social media to say that while they don’t condone the killings, they do question the eviction of people during winter.

Jacaranda News reported a couple of hours ago that “people are already blocking roads again. Asking for money or cigarettes to allow some people to pass.”

Ramokgopa pointed out that there have been programmes aimed at promoting security and a better quality of life for citizens in the area, but said: “We remain deeply concerned by the acts of violence, displacements, confrontations, loss of property and gross disregard as well as violation of human rights every time evictions take place.

“Our experience is that evictions leave behind a trail of pain, which could be avoided and minimised, as we treated even those of our ungovernable citizens with respect rather than a sense of punishment.”

A mayoral spokesperson said that as part of the overall commitment between government and the Red Ants, the City agrees to ensure that all future evictions do not infringe on the human rights of residents – especially the vulnerable groups: the elderly, women, children and people with disability.

Ramokgopa reiterated: “We need to reinforce and make into a habit, the recent agreement between the department of cooperative governance and the Red Ants’ management to work together to be sensitive to interests of the vulnerable groups during evictions as well as to minimise unnecessary confrontations.”

The City acknowledged it can make the situation more humane by ensuring eviction notices are clear with clearer instructions informing residents what to do and how to comply; and how to seek alternative accommodation and protect their valuable properties.

The mayor’s office said it was concerned by “actions and utterances some political parties mobilising the vulnerable groups to defy court orders resulting in resistance and violence, and want to make it clear that we do not accept illegal occupations of land and properties. We therefore call on our communities to work with us.”

Ramokgopa said: “Violence has no place in our society, It is a sad day indeed that we are witnessing loss of lives by our own brothers. Families are being robbed on fathers, brothers, and sons because of extremist hell bent on breaking the law and destroying everything in their paths”.

The Executive Mayor has called upon the Metro Police to exercise the law enforcement responsibilities and ensure that the perpetrators are brought to book .

The City said it regrets “the inconvenience, pain and the unfortunate loss of lives caused by todays disruptions and illegal protest”.

The DA tweeted that “the people of #Hammanskraal need REAL leadership that is honest and responsive to their needs” and that “the violence stems from Mayor Kgosientso Ramokgopa’s failure to address the massive housing crisis in Tshwane.”

On Sunday in Durban, at the National Day of Prayer event, the South African president said: “We want a South Africa that is united and peaceful and which does not discriminate against anyone regardless of gender, class or race.”