Social media has gone crazy since an apparent “stare down” – between South African swimmer Chad le Clos and his American rival Michael Phelps – at the butterfly 200m semi-finals last night in Rio, Brazil. According to reports, Phelps says he wasn’t looking at Le Clos, and those close to the American Olympic record-breaker (he won his 19th Olympic Gold medal yesterday) say that’s just Phelps’ intensity when preparing for a race. The media loves the supposed rivalry between the two swimmers and it looks set to make tonight’s race even more exciting to follow for many.

It will be a “rematch” for the two since the London Olympics four years ago when Le Clos shocked Phelps and the world by becoming 200m butterfly champion. Waiting for the semi-finals last night Phelps’ intense stare was captured on film… while Le Clos was shadow-boxing in front of him… The scene set Twitter alight with tweets about the “death stare” that finally morphed into a trending #PhelpsFace.

When asked about the incident, Le Clos said:

‘For my side there is no real tension. I have no emotion when I am racing. Of course there is a huge rivalry between Michael and myself. As I have said before I have huge respect for him.

‘In the last year there was definitely spoken words over his nationals and I had world championships, I think a lot of it was misquoted. But at the end of the day I am a racer and I want to beat him and he wants to beat me.’ After the incident, Le Clos qualified fourth fastest in the finals of the men’s 200m butterfly – a brilliant outcome after winning Silver in Freestyle less than an hour before! (Phelps finished second in the semi-final.)

READ MORE ABOUT LE CLOS AND PHELPS: Olympic Clash of the Heavyweights in the Swimming Pool Tonight 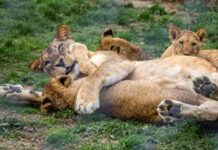