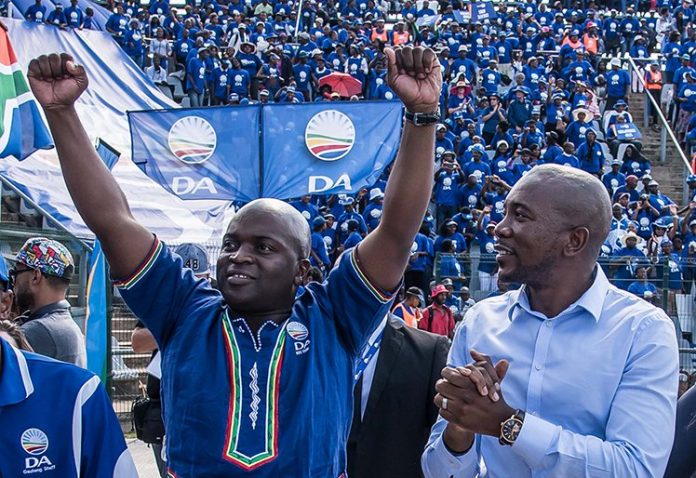 PRETORIA – Newly elected Tshwane mayor, the DA’s Solly Msimanga, declared that today “corruption, cronyism, nepotism and patronage comes to an end” in the capital. He said there will be no more “blue lights” and that Tshwane is to be a city for all the people and not just a small-connected group.

Msimanga was sworn in Friday after being officially elected – unopposed – as Mayor of Tshwane. His position was secured after the EFF voted with the DA and other opposition parties.

As in the Western Cape, Msimanga said there will be no more blue lights in Tshwane (referring to the government’s VIP protection motorcade – see Nando’s spoof video below).

“Even when [President Jacob] Zuma comes in believe me there will no longer be blue lights. We will ensure that this city has a new feel and new look. All those who used to think they are VIP in this city… no more. The VIPS are residents of this city.”

Here’s a selection of comments from Msimanga’s inaugural address:

“This is not just any City, but our Capital. We have a responsibility to ensure that we set the highest possible standard for the rest of the country. We must be a shining example for all our people across South Africa.”

“We have listened to the people. They have made their voices heard loudly: corruption, cronyism, nepotism and patronage comes to an end. This will be a city for all the people of Tshwane, not just a small-connected group of people.”

“Our commitment throughout this campaign was that a DA-led government in Tshwane would turn this City around; that we would stop corruption, deliver better services and create jobs. These are not empty promises, but commitments made in honour of former President Nelson Mandela, who overlooks this City from the steps of the Union Buildings.” “Tshwane must be City for all regardless of whether you are a resident of Hammanskraal or Centurion.”

“That is why the focus of my government will be to ensure that we adopt job-creating policies that will redress the inequalities of the past and allow all the residents of Tshwane to pursue a life they value.”

“That is why today I am drawing a line in the sand. We will have a professional, skilled public service that works for the people. Those who use their positions to rob our people are not welcome here.”

“Let me be clear: this city will not tolerate corruption from any person, no matter who they are. If you steal from our people, you will face the full force the law.”

“Over the course of the election campaign I met tens of thousands of the residents in this City… I heard countless stories of how joblessness, inadequate service delivery and crime affect them on a daily basis… That is why this government will be committed to realising pro-poor,  job-creating government of the people, for the people.”

“Together we will work to address the issues of housing for the residents of Mamelodi, Hammanskraal and Pienaarspoort, too many of whom have had dreams of owning houses shattered and continue to live in shacks without access to decent services.”

“And I am committed to addressing the problem of the over half a million residents of Tshwane who are without jobs, or who have given up looking for jobs. We will reinvigorate the economy of this City to create jobs… We will stimulate business growth through incentives, such as rate rebates and preferential tariff structures and investigate the implementation of Job Zones in Babelegi, Ekandustria and Garankuwa.”

“We will make sure that these Job Zones have a coordinated service delivery plan to ensure an adequate electricity and a stable clean water supply.”

“And we will empower the private sector to be the driver of growth and job creation in Tshwane by making the City more business friendly… We will work to eliminate red tape and simplify regulations, especially those relating to zoning, planning approvals, health and safety, traffic and licensing.”

“Tshwane will be the Capital of job creation in South Africa.”

How people of #Tshwane sleep knowing that service delivery is coming their way pic.twitter.com/1YekJC4NLk

#Tshwane Msimanga tells public servants the time of sitting around and doing nothing is over. pic.twitter.com/jZiv6JZfAf

Because #Tshwane employees we had to celebrate woman's month and maybe our new mayor ? pic.twitter.com/PC5TdcJ2Qu

Tweet from @Fireprufe15: “#Tshwane – have you ever seen a group of people this happy in your life?” – see video below:

Tweet from @Die_Voorblad – “Unfortunately singing is not the answer, service delivery is! The reason why they lost control in Tshwane! #Tshwane.” See video below.