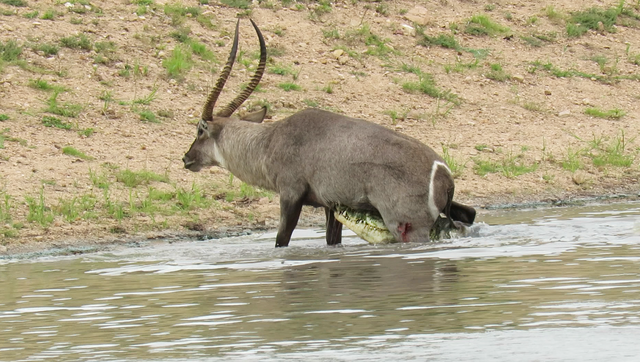 A very patient visitor to the Kruger National Park in South Africa has caught this gripping moment that a waterbuck pulled off a great escape from a crocodile.

The sighting, posted by Latest Sightings, was filmed by 33-year-old Credit Controller Wynand Vosser, who in all his years visiting the Kruger had never seen a crocodile attempting a kill “so it is very rare for me”.

He says the “dream sighting”, at Mpondo Dam, came after a very patient wait of almost an hour.

Vosser and his fiancee had seen the two waterbuck race to the water as if they were being chased, and through his binoculars he could see the crocodile, hippo and that one of the waterbuck was bleeding from his hind leg.

“The waterbuck got away after it fell on the croc. Hard to believe that it could be so lucky to escape the predator as the croc had him in a tight grip and dragged him under the water.

“After it escaped we followed the buck into the bushes where it just stood and looked like it didn’t know what to do.”

Watch Video: Waterbuck escapes the jaws of a crocodile