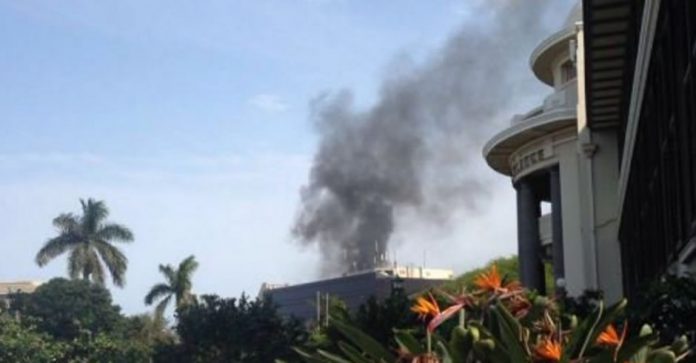 DURBAN – Classes have been suspended at the University of KwaZulu-Natal (UKZN) until further notice, following unrest on the three campuses.

In a statement issued Tuesday, Vice-Chancellor and Principal, Dr Albert van Jaarsveld, said the situation had become “untenable” after gunshots were heard on campus (see video below).

Students began protesting against tuition fees on Monday, and at least 16 – some of whom apparently had nothing to do with the protests – were arrested yesterday.

Dr Van Jaarsveld said every effort is being made to engage protesting students and that “we urge students to desist from engaging in illegal and destructive acts, and allow space for consultation to take place”.

Students have been protesting about impending fee hikes, and during the early hours of this morning it was reported that students had torched six vehicles. Meanwhile a policeman is alleged to have raped a student on the Pietermaritzburg campus last night; and this morning police apparently shot at and wounded a young woman.

Students have taken to Twitter to express resentment at the manner in which the South African media portrays protests at UKZN, compared to the solidarity it shows with protesters at the Universities of Cape Town and the Witwatersrand. One also said: “Media is quick to cover stories about burnt property, but not about students being raped and shot at with real bullets” and another said “and the sad part about it all is that the media is making it look like its the students who are provoking the police”.

The students allege the police have not just been using tear gas and rubber bullets, but live ammunition too. I snapped these pictures near the library at #UKZN. I'm not sure what was burnt, definitely not library or books. ?? https://t.co/41Oj7oPT7X

We've all seen this image before! South Africa students have throughout history been fighting for education! #UKZN ? pic.twitter.com/WZxUriBfk4

The girl's injury and the guy who carried her. #UKZN pic.twitter.com/AkR3rrJ3rG

Looks like a war zone at University of KwaZulu-Natal #UKZN between students and police! Stay safe everyone ? pic.twitter.com/EiR2wfmjB6

The law library was burnt.

UKZN has decided to bring forward the September holidays. University is closed from today and will reopen on 20 September 2016.

At #UKZN PMB this morning female students are marching to the police station in solidarity with the raped student. pic.twitter.com/iNOkCqWjwN